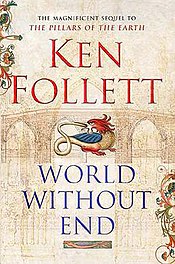 In many ways, this book would be more aptly entitled, “Novel Without End” as much like a soap opera, it’s a never-ending story. Having said that, it’s also a very entertaining read that, using the setting established in Pillars of the Earth, the imagined Kingsbridge and Shiring (UK), moves readers familiar with that landscape and events forward in time roughly one hundred and fifty years and introduces us to a new set of characters but, in many ways, a very similar story. It’s almost as if Follett, having such success with the first book, uses the template for that as a basis for this novel as well.

I never read Pillars of the Earth. I did watch the TV series and enjoyed that thoroughly. I had every intention of engaging with the written version, but when I picked up the book, I didn’t want to invest in over one thousand pages of a narrative that I already knew, so I moved straight to book two. I know that was naughty and that books have so much more depth than their filmic equivalents, but I just couldn’t face that many pages when I knew pretty much what occurred never mind the ending.

Instead, I moved on to the second book and, despite some minor reservations (which I will get to) was not disappointed.

WWE basically follows the lives of five people who, at the beginning of the story are united by a dramatic incident. There’s a man named Thomas, and four young people, Merthin, Caris, Merthin’s brother Ralph, and Gwenda, all of whom either bear witness to and/or participate in a terrible crime and agree to keep it a secret (there is something else that occurs, but I don’t want to spoil the book). The seeds are thus sewn for an epic tale of love, loss, murder, grief, humour, sex (some very squirmy, clumsy sex scenes, I have to say), betrayal, cruelty and so much more. Despite class and spiritual differences, these five people share something that means they are forever linked and while we at times, as readers, can forget this, Follett will ensure that at some point over the years that are covered (decades), we’re given reminders of why the initial incident is significant and the awkward bond that exists between these characters.

Of course, these are not the only individuals in the book; neither are they the only important ones. So many populate this story and, it’s testimony to Follett’s writing and his ability to juggle what in other hands might have been an unwieldy cast that we not only know these people too, but we empathise (or not) with their decisions and the consequences they face as a result of their actions. Where I did struggle a little, is that I felt some of the characters were too black and white – the religious figures particularly. For example, the monk Godwyn and his assistant Philemon were predictable precisely because they generally acted out of self-interest – they never deviated from this pattern throughout and thus never grew or changed, not even when anyone else in the same situation might. Not once did they demonstrate the capacity to think outside their own needs and were constructed as fine little sociopaths. This galled after a while and actually elided some of the drama and tension with which they were associated.

Nonetheless, drama and tension abound as beloved characters are tested in ways that make you ache for them – but also, I confess, become frustrated as you want to screech, “Give them a break!”. I don’t think that phrase is in Follett’s vocabulary and, at times throughout the over 1000 pages of WWE,  the relentless trials that beset these characters, from accusations of witchcraft, foiled love, murder, plague, self-abnegation, decei

t, failed enterprises, bullying, and the machinations of others undermining talent and good intentions, grow tiresome. But they also keep the story moving along and readers turning pages – well, at least this reader.

Was this a satisfying read? Yes, it was. Not only because the overall story arc is gratifying and the fact the huge investment first begun when that small group share a terrible secret pays off, but because the sense of place and time underpinning the entire novel, the rich history of the period, is beautifully and painstakingly evoked. Not in a didactic way, but in such a manner that the characters in situ are brought to life and even the inanimate spaces, such as the monastery, hospital, taverns and other places, inventions of Follett’s imaginary Kingsbridge, have life breathed into them. It’s no wonder an eight part television series has been made of this book as well  – produced by Ridley and Tony Scott (among others) and starring Cynthia Nixon and Miranda Richardson. Will I watch it – the jury is out on that for same reasons that I didn’t read Pillars…

If you like historical novels full of drama, pathos and which are unapologetically soap-opera-ish, and are prepared to commit to a huge undertaking by reading this story, then World Without End is for you. For me,  it was time well spent.