Book Review: The Truth About the Harry Quebert Affair by Joël Dicker

What an unusual book this was. Highly acclaimed and placed within the crime genre, I admit the title and the accolades Joël Dicker has received intrigued me. Yet, when I began reading The Trut 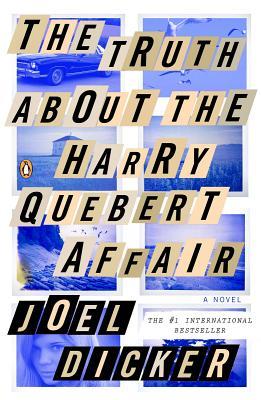 h About the Harry Quebert Affair, my initial response was “I am not going to enjoy this book.” There was something simplistic about the writing style, the repetitiveness that begins early in the novel, and it both irked me but also piqued my interest – what on earth is the writer doing?  Not very far into the narrative, I became hooked and stayed captivated to the very end.

So, what’s the book about and why all the hype surrounding it? The Truth About the Harry Quebert Affair is ostensibly a murder-mystery. It tells the story of a successful young writer, Marcus Goldman who, having difficulty producing his much-anticipated second novel, seeks the reassurance and help of his mentor, Harry Quebert, a great novelist who, thirty-two years earlier, produced what’s since become an American classic, The Origin of Evil.

While staying with Harry in New Hampshire, Marcus uncovers a dreadful secret – one that could destroy Harry’s reputation – that is (this is not a spoiler, as it’s in the blurb) that thirty-three years earlier, his great mentor had an affair with a fifteen-year-old girl named Nola Kellergan – a girl who disappeared the night she and Harry were meant to elope, never to be seen again.

Uncomfortable with what he’s learnt, but determined to keep the unsavoury secret safe, Marcus returns to New York.  A month later, when Nola’s body is found buried in Harry’s garden and Quebert is arrested on suspicion of murder, Marcus rushes to his mentor’s side, determined to clear Harry’s name. Launching his own investigation, Marcus discovers a town rife with secrets and versions of events, of characters practiced in dissembling, many of whom have their own motives for not only killing Nola and another woman who was shot as she tried to aid a fleeing and bloodied Nola all those years ago, but for wanting Marcus to cease his incessant probing…

Segueing from the present to the 1970s, Dicker evokes not just the past with a dreamy reality, but a town on the threshold of having its innocence destroyed, of dreams about to be shattered, and families on the brink of imploding. Atmospheric, moody and creating both a claustrophobic intensity and yet able to summon the beauty of the natural surroundings, the reader is drawn into the tale of Nola and Harry, those who come into their orbit, and all the different versions of what happened that Marcus uncovers. Through his eyes and the words of Harry’s novel and, as it starts to be born, Marcus’ new one as well, we’re given insights into the past, present and the terrible possibilities of that fateful time back in the 1970s and the consequences of what unfolded in the here and now.

The novel plays with notions of truth and fiction – something the title itself announces when it boldly asserts it’s a “truth” and yet, it’s also a work of fiction. And so, the reader is plunged into liminal space where the lines between the two – between fact and fiction, truth and lies, are constantly blurred.

As much a treatise on writing and the writer’s craft; it’s a love story that, despite the unsavoury nature of the love (older man and not yet legal girl), doesn’t have you squirming in disgust. It is also about role models and mentors, and the relationships we form with them. Above all, it’s about memory and the stories that shape our recollections – how we tell them, how we remember them, how they structure our lives and the way we understand and read each other.

All the characters are beautifully and realistically drawn – particularly young, passionate and fascinating Nola – the object of everyone’s attention. The only weakness in the novel (apart from some of the repetitiveness – but that also works to play with the reader’s and character’s heads) is Marcus’ mother. Now, I know this type of Jewish mamma – I am Jewish and there’s no doubt, my mother and many of the women of her acquaintance rang familiar as I read the dialogue and interactions between mother and son. But she also grated in a book that took pains to construct fully-rounded and realised people. In that sense, she read more like a comic foil (though why, I don’t know), a caricature rather than a character and as such belonged more in a re-run of the US sitcom The Nanny than in the pages of this wonderfully disturbing, tricksy and clever novel.

Skilfully plotted, deceptively simply written (it is very easy to read), this is a terrific book packed with twists, turns and surprises that will frustrate, shock and delight. Four and half stars (the irritating and, frankly, misplaced mother forces me to take away half a star!).