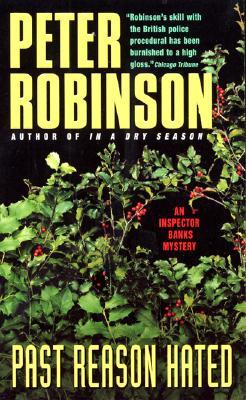 For all that I adore Peter Robinson’s Inspector Banks books, this one frustrated me. In all fairness, it still had wonderful characters, Banks himself demonstrating compassion and empathy toward

s suspects and guiding, through example, a new and eager DC, Susan, as she embarks on her first case. Peripheral characters are roundly drawn and you get a marvellous sense of them with merely a few words or some dialogue – something Robinson does so well. Place and the season are also evoked with flair. What irritated me was the fact that usually the criminal and the motive behind the crime are buried beneath a mountain of clues and the reader joins Banks as he digs and sieves through the layers, each chapter bringing us closer, each page leading towards a revelation that can leave you on the edge of your seat. In this way, we delight in various discoveries; the links formed and enjoy the ‘light bulb’ moment where everything becomes clear. With this book, the murderer and the rationale for the crime are apparent within pages. It is quite obvious and while ordinarily this doesn’t detract (too much) from the pleasure of embarking on the investigation, in this instance it was annoying and spoiled the reading and investigative experience. This is because ‘knowing’ Banks as a regular reader does, there is no reason that he too wouldn’t be aware, so you become bothered by his overlooking of the apparent. Instead, a red herring is planted at the beginning and in a burst of irksome perseverance, Banks cannot let it go and it preoccupies him (and thus the reader) at the expense of clues staring him in the face.

Throughout the book, Banks expresses his exasperation with this case and the fact that he feels something is eluding him. Yes, it was and it didn’t ring true to his character and his ability to laterally think, to understand the criminal mind and, most obviously, the blatant clues strewn before him. That the new DC Susan also fails (conveniently for the author) to pass on information that would lead to identifying the killer is just hair-tearingly stupid. I won’t spoil it by revealing what was evident, but I wonder if other readers felt the same? I kept reading hoping, believing I was wrong in my assumptions… Disappointingly, I wasn’t and so ended up pissed off with Banks for being so thick-headed! But, perhaps this is also a sign of how invested I am in the books and the principal character – I know he is better than this (as is Robinson). I still adore the books, but this one wasn’t as clever or satisfying as the others.