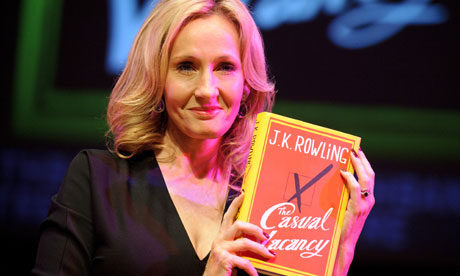 hy is it that when a songwriter or singer changes genres we applaud their daring, write, and speak about how multi-talented they are; how fortunate we are to gain so much pleasure from their creativity? But, when a famous author dares to switch genres, there are rumblings and grumblings and unfair expectations placed upon them – before the work is even published? Warning the marketplace that The Casual Vacancy would be nothing like the Harry Potter books, that it was for adults and quite depressing, Rowling was nonetheless encumbered with criticisms and snubs for having the literary presumption to leave Potterworld. Yet, she was blunt: if you were looking for Hogwarts and wizards, she warned, they would not be found in the pages of her new book. Yet, so many reviewers have come to the novel with the expectation that, for some reason, they should be there, even if just a glimmer, whisper or peek. They practically accuse her of letting readers down, of abusing her position as a world-famous writer instead of giving her the benefit of the doubt and congratulating her for demonstrating such imagination and lexical dexterity.

Frustrated by attitudes, stories and some reviews (which were not reviews because it was clear the book hadn’t been read, rather they were more rebukes) the publication of this book produced, it was hard not to let them tarnish the reading experience. I tried to approach this book as I would any other by a beloved author who decided to try their hand at something different and read and rate it on its own merits – and I was not disappointed. But, as Rowling warned, it’s no Harry Potter: the only magical thing is the writing, which is superb.

The Casual Vacancy is, frankly, brilliantly awful. Set across two English towns, Pagford and The Fields, one with a very acute awareness of its history, the other a by-product of late modernity, they are inhabited by a cast of mostly toxic characters who illustrate, through 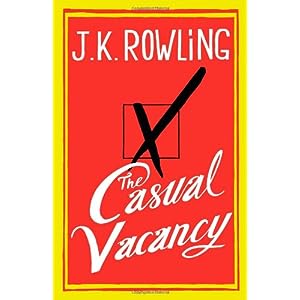 their small-mindedness and mean-spiritedness, the pettiness that can exist in supposed idyllic English village-like communities. As I read, I kept thinking of a quote about academia that’s been attributed to Henry Kissinger (among others), that “the politics are so vicious because the stakes are so low” – I think this sums Rowling’s book up nicely.

After the death of a member of the local council, Barry Fairclough, various members of the Pagford community vie for his vacant seat. As they do, the reader is drawn into the complexity and ugliness of what should be simple lives, albeit, affected by mourning and loss. Populated by ego-centric, gossiping, classist, racist, homophobic, alcoholic, drug-taking self-interested people, Pagford and The Fields appear to be governed by folk who can barely function in their own lives, let alone make decisions that will affect others. And, as the council move towards another election, it becomes clear that one person’s loss is potentially another’s gain.

Not even the children in this miserable tale are spared the less attractive qualities the adults so readily exhibit, and is it any wonder when the grown-ups are their role-models? The kids have learned their lessons well. Dishonest, thieving, sneaky and risk-takers, they are both effect and cause of the outcomes.

As the story progresses, Rowling demonstrates her uncanny ability to mine a character’s emotions and psychology, to peel back layers to explain even the most unlikely or heinous of behaviours, to provide a context for understanding (but rarely approving). Piecing together the jigsaw of individuality, family and community, she mercilessly flays the characters, forensically dismantles their psyches and leaves them in the equivalent of a mortuary for us to gaze upon in horror.

For example, there’s Simon, violent, bad-tempered and his ineffectual wife, Ruth; their two boys, Andrew (called “pizza-face” by his aggressive, abusive father) and “Pauline”; Parminder, the local doctor, surprised by her reaction to a fellow-councilman’s death and who appears to understand the bodies and minds of all the townspeople in her care but not her own children. Her dashing heart-surgeon husband, Sukhvinder, regarded as a hero by those he loathes, especially the Mollisons – a work of gruesome art  – for whom Rowling shows very little sympathy. Empathy is reserved for some of the residents of The Fields as well as the children in the novel who can do little more than suffer their parents and their foibles, until they discover the means to revenge – not served cold, but molten hot.

The race is on to secure the vacant council seat and, as the story progresses, skeletons are exposed, secrets uncovered. Everyone in this novel is damaged – severely and, when terrible tragedy unfolds, it’s only the myopic townsfolk who didn’t see it coming.

The writing is what makes this bleak book. While Rowling does head-hop (a cardinal sin in most author’s hands), she does it with aplomb and there’s a sense in which this becomes a stylistic of the narrative. We drift from one character’s thoughts to another’s, caught in the current of activity, the plots and plans of little men and women. In terms of the tone, I was reminded of Elizabeth George’s marvellous and heart-rending What Came Before He Shot Her, only this book is firmly rooted in the middle classes (though there are those who feature who can no longer claim a place there) and the life decisions that can affect generations. Also, George’s book redeems some characters – see if you think the same happens here. I have also heard, again before publication, that the book was likened to Midsomer Murders. The Casual Vacancy make Midsomer Murders seem like Narnia – before the White Witch.

No, this wasn’t what anyone expected… but how marvellous is that?