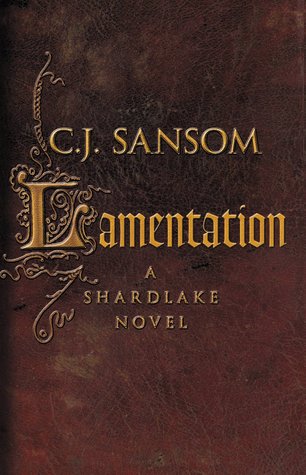 w Shardlake series of novels, about a hunchback lawyer practicing in the time of Henry VIII, are simply wonderful and this, the sixth in the series, does not disappoint.

After a horrible and explosive beginning, the story unfolds slowly but effortlessly, immersing the reader back in not only Henry VII’s final months, but also Shardlake’s life and law practice.

It’s autumn 1546, and King Henry, obese and quite disabled, is nearing death. Aware of this, the mercurial king, who forced his country from Catholicism and the yoke of Rome to Protestantism, dissolving the monasteries, claiming their vast wealth and punishing those who refused to acknowledge his supremacy over the new church, is once again undergoing an existential crisis. Vacillating between Popery and Protestantism, a struggle based on religious principles begins and those behind the throne with the greatest to win or lose begin to make their move. Henry may be dying, but he is powerful and vindictive, sending friends and foe to the Tower with ease, for if there’s one thing he can’t abide it’s those he perceives as disloyal, and keeping secrets is among the worst of sins.

When Protestant Queen Katherine discovers a book she’s written called Lamentation, and which describes her personal and Protestant religious beliefs, has been stolen, she is panic-stricken. Knowing her faith goes against that held by her husband and that there are those on his council plotting her downfall, the book could be the exact weapon they need. Keeping the book and its theft secret from the king, she summons Shardlake to her side and begs his help.

Unable to resist his queen, Shardlake knows discovering who has stolen the book will not only be difficult, but very, very dangerous. When bodies start to pile up, his greatest fears are realised, only the terrible threat to him and those he loves is yet to materialise…

This is a marvellous story that plunges you into late medieval London and doesn’t let you go. Sansom takes his time with the story, allowing it to time to evolve, walking the reader through the familiar and pungent streets of Shardlake’s neighbourhood and other parts of London, the cloisters of various palaces, or taking us on uncomfortable rides outside the city walls. We feel the hot breath of summer, the discomfort of the fabrics as they cling to sweaty limbs, the stink of the river, and the fear of darkness and those who lurk in the shadows, watching and waiting.

Evoking this period and the terror, suspicion and religious persecution that accompanied it, as well as the fight for supremacy in the court and kingdom, Sansom has written a wonderful historical and crime novel that nonetheless still manages to capture not only the era, but Shardlake’s personal life and his complex but kind and intelligent character.  Other characters are also beautifully drawn and we empathise with their efforts and troubles as well as enjoy their triumphs. A wonderful secondary narrative about two squabbling and vile siblings is also very well executed.

I was absorbed in this tale that on occasion made me gasp with horror and genuinely fear for characters. Without spoiling the story, the last pages of the novel were both an ending and beginning, but I sincerely hope we haven’t seen the last of Shardlake yet. The author’s notes at the end are also a marvellous read, revealing not only Sansom’s level of research, but his dedication to and passion for crafting a compelling tale.