The Other Wife by Michael Robotham

The latest book in the Joseph O’Loughlin series, The Other Wife is a cracker of a read that I dare you to be able to put down once you start. I forced myself only so I could savour the joy of a great story with characters I’ve grown to know and love and who are embroiled in a plot both dark and, for Joe at least, deeply, personal.

The book opens with Joe relocated to London with youngest daughter Emma, contemplating life after the death of his wife, when he receives the call adult children both dread and half anticipate: his eminent surgeon father has been admitted to hospital and is on life support.

Racing to be by his father’s side, Joe reflects upon this cold, distant and judgemental man he barely knew and yet whose approval he endlessly sought. When he arrives at ICU, his father is not alone. A younger, lovely woman is sitting by his side, clutching his father’s inert hand. But it’s when she tells Joe who she is, that his world is turned upside down and inside out.

Everything Joe thought he knew is now unstable and with each new piece of information, he seems to lurch from one discovery and response to another. Not even the grounding presence and help of Vincent Ruiz, retired cop and now a corporate investigator, provides the stability Joe needs.

The more Joe delves into his own and other’s histories, the more suspicious he becomes about what really happened to his father and why, but when the truth is finally revealed, not even Joe is prepared for the consequences.

Superbly written, tight, fast-paced and emotionally fraught yet always true, this is a magnificent book that puts family and personal histories under the microscope and doesn’t hold back. It’s explores the assumptions we make – about those we think we know and those we don’t. How unfair and self-righteous these sometimes are and the terrible outcomes that can occur when we’re swift to judge.

No-one is more honest or raw in his judgements than Joe – especially about himself. I think that’s what makes his character rich, real and so appealing. Flawed, vulnerable and yet with a strength he isn’t always aware of, this book really has him centre stage, placed in an oft-cruel spotlight under which he still manages to star.

My only disappointment (as always happens with Robotham) is that I now have to bloody well wait for his next book. Please don’t leave me waiting too long. This was stunning. 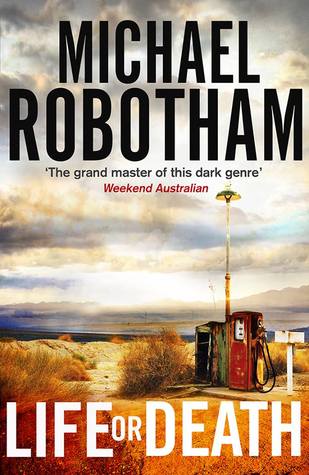 as so thrilled when Michael Robotham’s latest book, Watching You, the seventh in the Joseph O’Loughlin series downloaded on my Kindle. The only thing that disappointed me about this fast-paced, edge of your seat, nail-biting and every other cliché I can conjure instalment, was that I finished it in one sitting. I simply could not put it down. Damn. Damn. Damn.

The novel begins with Marnie Logan, a young, married woman with two children whose husband, Daniel, disappeared without a trace over a year ago. Grieving for her husband, Marnie (who has her own demons past and present to deal with) tries to cope. Depressed, she’s been seeing her neighbour, Joe O’Loughlin on a professional basis for quite some time. What she hasn’t revealed to him is that throughout most of her life she’s had the uncomfortable sensation of being watched – it’s nothing tangible, just a flash in the corner of her eye, a light touch, like cobwebs, upon her shoulders; the uneasy sensation that nothing you do is private.

It’s not until she finds an incomplete birthday present that Daniel was working on for her birthday, a scrapbook of memories, DVD of interviews and images of people from her past, that things begin to go awry. Far from being the celebration Daniel intended, there are people he interviews who are either terrified of Marine and what she did to them, or curse her to an early grave. When Marnie, confused and upset, turns to Joe to explain what’s going on, he turns to his buddy, Vincent Ruiz for help.

Just in time, it seems, for Marnie is going to need some friends, particularly when a shady character she’s involved with turns up dead and the last number he called and the last person he’s known to have seen, was her.

Denying all knowledge and proclaiming her innocence, everyone can see she is lying, but what is Marnie hiding? When her history starts to unfold, not even Joe is prepared for what he discovers…

Yet again, Robotham has written a tautly paced, beautifully written novel that is full of surprises, even when you think you’ve predicted the outcome. The characters are expertly drawn and so believable. You invest in each and every one – whether it’s a cynical cop, a concerned psychiatrist, Marnie or her terrific kids. And, of course, there is always Joe and Vincent – their dialogue snaps, their observations (about crime scenes, individuals, the world) crackle. Humour laces the novel despite its heavy themes as does the importance of family and trust. But this novel is also about the ways in which we watch each other and what can be drawn from observation alone. It’s not enough – it’s never enough, and though scopophilia (the (erotic) love of looking) reveals a great deal (usually about the voyeur), it can only ever offer facades, a partial picture of who a person is – not that this prevents decisions, reckless, dangerous ones, being made on that basis. The book is also about the dangers posed by judging a person too quickly on their appearance or on unreliable information, on the basis of what is seen alone. Like an ice-berg, the novel demonstrates that it’s the seven-eights we don’t see that carry the burden, the weight, that offer context and explanations.

All very well and good if there is time, but for Marnie, Joe, Vincent and everyone else, time is about to run out….

Another gripping, fantastic novel from one of the greats in the psychological thrillers/crime genre.

Damn… now I have to wait for his next one…

Five out of five plus!