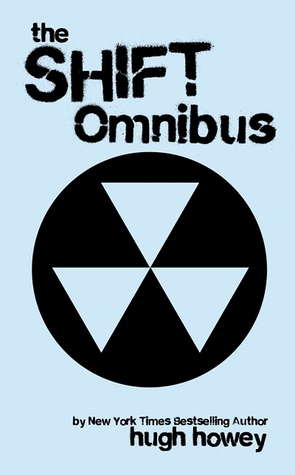 irst encountered Howey’s writing with the incomparable Wool (which I also reviewed) so I very much looked forward to reading another of his novels. Hurricane isn’t what I expected at all, which was a disaster story of epic proportions. Instead, what I discovered was a very sweet coming of age story which focuses on the unpopular, insecure, middle child Daniel, who is more often the butt of cruel jokes (and the cruellest is perpetrated at the beginning of the novel) than he is a hero.

Daniel is also decent, loving and protective of his family, especially his little sister, Zola, and is beyond proud of his big brother, Hunter.

When Hurricane Anna tears through a quiet town “near Charleston”, in which Daniel lives, leaving behind terrible physical devastation, the inevitable rebuilding takes on emotional and psychological significance as well. Forced to emerge from the cyber-cocoon and media bubble in which they dwell, Daniel and his family rediscover not only themselves, but also each other. Along with this comes introductions to neighbours they didn’t know existed and, as they rebuild shattered houses, the foundations for solid friendships and even love is also laid.

This was a very different book to Howey’s last one and to what I expected. Gentle, reflective, the entire story is a metaphor for so many things. I really enjoyed it and the meanings it softly, despite having a Hurricane at its heart, imparts.

Like quite a few readers and writers before me, I have a confession to make. I tend to avoid self-published books – generally, at any cost – for a whole variety of reasons that blur the professional and the personal. I like my books validated by a publisher, editor, copy editor, marketing team and everything in-between. I figure if they invest in something, then it’s good enough for me. Of course, us readers know that isn’t always true – some professionally published stuff doesn’t make the grade either but, in my experience, that happens a great deal less often than with self-published work. I know, I have read quite a few in an effort to give them an opportunity to both shine and prove me wrong. Up until now, I haven’t been….

Then I read Wool. On the recommendation of two people (one a fabulous writer – OK, it was Anthony Eaton – the other was his lovely wife, Imogen, thanks, Tony and Min!) whose taste and judgement I bow to, I bought and read Wool by Hugh Howey and, in doing so, every negative preconception I ever had about self-publishing has been turned on its head. Not only can Howey write (and then teach a few of us with more novels under our belt how to), but also Wool is one of the finest science-fiction books (no, dammit, forget genre, it’s just one of the best books) I have ever read. I am not kidding. It is absolutely brilliant. I want to sing it from the rooftops, shout it from the car as I drive down the street, blab it all over my website, blogs and FaceBook pages – well, I am doing the last bit 🙂 Read this book!

I am not the only one who feels this way either. What started off as a self-published novella of 12,000 words, about a post-apocalyptic world where humans are confined to a place called the Silo, and the levels they exist upon, their roles within these spaces and the laws and punishments meted out are strictly regulated, in less than 12 months, it has become a publishing sensation. Fans in the USA begged Howey to write more in this world. He did. Thank goodness. Now, Wool – or the Wool Omnibus, which is what I read and which is made up of five novellas that when read together make for one utterly compelling story, is available. It’s a tale about humanity, or lack thereof, power, totalitarianism and a range of deeply philosophical and ethical questions. But don’t think for a moment this book is preachy – on the contrary, by focussing this epic tale on a few characters whom we quickly grow to love, admire and loathe, Howey has made this wide-ranging and fabulous story incredibly personal as well. You invest in both the plot and the people who inhabit the Silo. So much so, I was crying, catching my breath, laughing, and despite being exhausted, unable to put the damn book down.

Upon finishing it, I felt something I don’t often feel on completing a novel (for good and bad reasons): I felt satisfied. The ending is perfect. I don’t need the tale to continue (or even particularly want it to, which is always a good sign for me – when, like Oliver, I want more. But here, I feel it’s also indicative of just how right Howey has paced this), even though a great deal of what occurred within will resonate with me for a long time. Nor do I feel cheated. Reading Wool wasn’t only a marvellous fictive experience; I also received a lesson in how to write. Howey paces this book perfectly, maintains suspense, ups the ante at every opportunity, the emotional cost, the sacrifice and consequences. Nothing is laboured. Thank you, Mr Howey.

If you think I’m raving too much, well, not only did Random House in the UK pick this tale up and is publishing hardback versions, but Ridley Scott and 20th Century Fox are optioning the rights for the movie. Credit to Howey, he is keeping the book rights in the USA for himself.
But before all you self-publishing gurus go mad, consider this also: not only is Wool a joy to read as a story, it is also mistake free. Grammar, syntax and punctuation (apart from one minor error I picked up – and that’s much less than appears in my professionally published books!) has been honed and painstakingly corrected. It reads beautifully in that regard as well. The language is wonderful, evocative, moving and polished to a shiny perfection.

I think you get the picture – Wool is a literary, sci-fi reading treat, a genuine surprise and pleasure. It is not “fad” literature or jumping on any literary bandwagon (as many are wont to do). It acknowledges its roots in an old and proven genre and then takes it forward. Magnificent. Really.
Make sure you don’t miss out.