This was such an odd book. I started it a few months ago and had to put it aside as it simply didn’t engage me. Then, having finished another of Atkinson’s books (When Wil 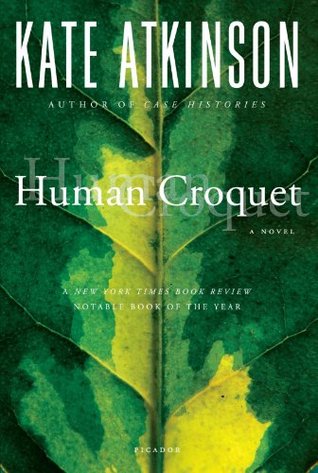 l There Be Good News) and not wanting to move away from her writing, I picked this one up again, started from the beginning once more, and couldn’t put it down.

Ostensibly the story of Isobel Fairfax, a young British woman who at an early age, along with her unattractive younger brother, Charles, “loses” her mother. Unlike Charles, Isobel appears to have the ability to slip through time, back to the Elizabethan period, and thus her life becomes this peculiar negotiation of time, space and people. Though the novel has this magic realist/mystical element it’s also a coming-of-age-story, a tale of familial and suburban dysfunction, murder, disappearances, secrets and lies, and an exploration of the ties that bind and tear us apart. The novel takes the reader on a remarkable journey through Isobel’s childhood, adolescence and that of her parents and forebears, exposing warts, flaws, mistakes, triumphs and tragedies.

Capturing the essence of the 1960s as well as war-time London, the characteristics of class, neighborhoods and the passion and heartbreak of relationships of all kind, this pseudo and quite dark fairy-tale is remarkable. Moving, haunting, at times funny, always strange and yet familiar, the novel shifts points of view from first to third person and a cocky omniscient narrator who through Isobel also functions like a Greek chorus, or a Shakespearian player setting the scene and passing commentary upon what unfolds. The book plays with reader expectations, genre, the notion of secrets, and in doing so examines the minutiae of the everyday, and explores the adult world from a child’s point of view and vice versa.

All the world and time is Atkinson’s stage, and this is certainly an ambitious and clever novel that offers alternative readings of not only scenes, but characters’ interpretations of events. What the reader accepts is up to her or him, but nothing is predictable.

The prose is simply lovely and some of the ideas expressed are timeless and erudite and have you reaching for a highlighter in order to recall them. This story won’t appeal to everyone, and it’s very different in so many ways from Atkinson’s other books, but if you cast aside expectations and go for the ride, it’s one you won’t forget in a hurry.