I really enjoy Philipa Gregory’s books, especially those that cover the “War of the Roses” when the Houses of York and Lancaster and people with close ties of kinship to these great people jostled for power and the English throne.

The Kingmaker’s Daughter is the story of a woman who is often dimmed by the brightness and strong personalities of those who surrounded her, Anne Neville, the youngest daughter of the great warrior and “kingmaker” the Earl of Warwick. In this book, Gregory sets out to tell her tale, from a first person point of view, and accord the young woman who commenced as little more than a pawn in her father’s political games, to become, albeit briefly, the Queen of England, some agency. There’s a sense then in which Gregory is using historical fiction to accomplish revisionist and feminist history and, in that, she succeeds.

The problem with this book, for me, was twofold: firstly, I had not long read Sharon Kay Penman’s magnificent The Sunne in Splendour, another well-researched and beautifully detailed account of both Edward and Richard’s reigns – a period Gregory also covers. In Penman’s book, which is at least twice the length, Anne features strongly and sympathetically. She may be quiet and susceptible to other’s manipulations, but she’s also kind, intelligent and capable of making decisions. She’s a fully rounded and realised character – when rarely disappoints you because you understand her motivation and the context in which she behaves. Compared to Penman’s novel, in particular her portrayal of Anne Neville, Gregory’s doesn’t stack up so well. Anne comes across as weak, ineffectual, whiny, and a bit two-dimensional and very predictable – beyond women’s social roles and limitations in that period. Often her behaviour is inexplicable and it’s hard to escape the notion that thoughts and actions are being shaped to match history in ways that don’t always stay true to the character being created.

Secondly, in this novel, the other characters are far more interesting and engaging than mousy Anne. Contrasted to the splendid and at times diabolical Elizabeth Woodville, King Edward’s queen and her mother, Jacquetta, never mind her elder sister Isabel, Anne is a poor second best, despite being the main character. Her readiness to believe those who shouldn’t be trusted seems to serve the story and this interpretation of history more than it does logic. When she has the occasional nasty thought about someone or wishes ill upon them, it doesn’t appear to be in keeping with the woman the reader has had access to since childhood. It’s hard to explain without giving away plot spoilers.

But kudos to Gregory for offering a different interpretation to well-known historical events, such as the changing faces on the throne, the wars, the alliances, the internment of the princes in the tower, and the swiftly changing politics throughout this period. In keeping with her series, she eludes to the Rivers’s connection with the goddess Melusina and their supposed “magic” powers/use of witchcraft. Again, I didn’t enjoy references to this nearly as much as I did in the other books in this series such as Lady of the Rivers and The White Queen.

I found the first part of the book to be slow and ponderous, even though I love this period but Gregory is very skilled at giving details of the time without being obviously didactic. The second half of the book was a much better read and even a real page-turner, as events leading up to Richard taking the throne mean a fast pace is established and maintained and the machinations of the nobles come to a head. Knowing what happens doesn’t spoil it; there’s a certain pleasure to stacking up a good fictive interpretation against known facts

Overall, this is a better than good fictive version, despite my reservations, that history buffs and those who like Gregory’s books will appreciate.

Book Review: The Sunne in Splendour by Sharon Kay Penman

The old adage “history is always written by the victors” holds true – and when it comes to recounting the infamous War of the Roses – the ongoing fight between the houses of York and Lancaster and their bloody battle for the English throne in the fifteenth century – we have the saying enacted. For in the years after Henry VII took the throne, the Tudors (backed by Lancastrians) made a huge effort to both erase and alter the way the two York monarchs: Edward IV and his brother, Richard the III, were remembered. Documents were burned, other were b=changed, and new versions of events quickly scribed and distributed. While Edward was constructed as a man who was powerful, selfish and a womaniser (among other much worse things), it’s his younger brother who is served t 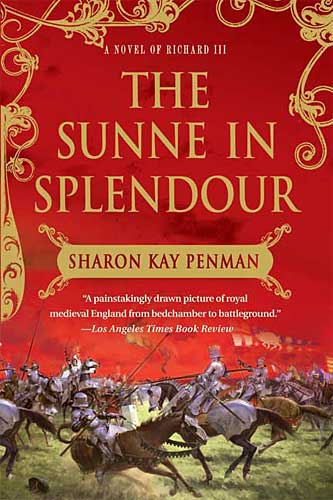 he cruellest turn by Tudor writers and their re-fashioning of history. Just as Shakespeare turned Richard III into a monstrous hunchback living in the shadows, murdering, plotting and betraying, so too the Tudor historians would have posterity believe that the Duke of Gloucester was a man capable of murdering children in cold blood, breaking oaths to family, poisoning his wife and, basically, any callous, unethical act that one could conceive. That these posthumous interpretations don’t accord with remaining contemporary accounts never seemed to disturb too many and so Richard III has, mostly, been remembered as a King best forgotten – a terrible blight in the royal lineage – and this despite evidence to the contrary.

It was towards the contradictory evidence and contemporary sources of the time that Sharon Kay Penman turned to when she decided to revisit the era and the man and present to us The Sunne in Splendour, a remarkable work that redresses some of the imbalances in the York and Lancaster story.

Covering the period September 1459 to June 1492, and purporting to be a novel about Richard III, Sunne is as much about his older brother Edward and his rise to power and unexpected death at the age of 40, as it is about Richard. A turbulent period full of internecine strife between noble houses that saw England pretty much divided along the lines of Lancastrians or Yorkist supporters, Penman revisions the history of the times and, in doing so  gives us an accomplished, gripping and amazing tale of England and Europe in the late Middle Ages. Sunne explores the politics, swift and terrible  battles, illness, the joy and horror of childbirth, death, faith and, most importantly, the people and the personal relationships behind, beside and on the English throne (and French and other) during this time.

Commencing while Richard is still a child in a large family, the novel allows us to see the changing, confusing world of war, power and petty politics, from his perspective. By introducing Richard while he’s still so young, the reader is also given the opportunity to see and understand him through other character’s eyes and we’re given a glimpse of his formative years and a context for why he becomes the man he does. Contrary to the ugly received portrait, Richard is presented as a young man who, despite the tragedy that affects his early life, is rather an idealist. He’s loyal, ethical, honest, and a victim of his own capacity for forgiveness and occasional flare of temper. That’s not to say that Richard is perfect – far from it. Part of the joy of reading Penman is she exposes characters’ weaknesses and emotional and psychological fragilities as much as she does their strengths – but she always places them within a broad social and individual context so we’re given insights and understanding as opposed to simply judgement. Richard isn’t spared this type of searing and sensitive examination and nor are many other characters – male and female.

At times a breath-taking picture of war and bloodshed and the sacrifices men and women make for power, the novel is also a love story in the grand tradition. Central to this is the tale of Richard and his beloved, Anne Neville – his childhood companion, cousin and later, wife. The other grand love story, though one that’s tainted by the strong and oft-times unpleasant and haughty personalities of those at the core, is that of King Edward and Elizabeth Woodville. Both renown for their striking physical beauty (Elizabeth was considered one of the most gorgeous of English queens – even those who despised her family, could not help but acknowledge her beauty), Penman describes not only their often dysfunctional relationship, but the mutual understanding and deep feelings (and attraction) they bore for each other and which transcended behaviours and actions that would have destroyed a lesser couple as well. Elizabeth particularly is represented as a mostly heartless character who remained aloof when it came to her children and those closest to her and who did whatever she could to retain control – over her life and that of her children’s as well as the reigns of authority. It’s only much later in the book that the reader begins to understand her motivations, her drive to retain what little dignity and power she can muster, that her earlier machinations are cast in a different and more sympathetic light.

But for all the other amazing characters that sprinkle this very long novel –  from Edward and Richard’s other brother, the foolish and possibly mad pawn, George Clarence, who is alternately charming, cruel and capable of great treachery, to Richard’s steadfast and not so loyal friends, Will Hastings, Jack Howard, the Duke of Buckingham and many others, including a host of Archbishops, Mayors, foreign kings and the ever-burdened and changeable populations of London, York, English towns and countryside – it’s Richard whose belief in social justice, capacity for great kindness and stern retribution as well as unconditional love, who shines.

There are not many novelists who can grip a reader for nine hundred plus pages and, while it took me a while to read this book, it’s because I didn’t want to miss one word of this sumptuous, heart-breaking, triumphant and tragic tale about such a significant period of English history. As I was reading, I couldn’t help but think how a fantasy writer would be hard-pressed to invent such a plot, conceive a host of characters and their actions like these. The devil is in the detail, and detail is what Penman has provided – from meals, fabrics, weapons, physical descriptions of characters, buildings, battles and weapons, to letters, dispatches, prayers, songs, dates and times – without sacrificing pace or story. This really is historical fiction at its finest: a magnificent read that recreates thirty-three years in livid and loving words, bringing to sumptuous and gory life the time the York’s shone – the moments when they were the sunne in splendour – before quickly waning under the might of the Lancasters and Tudors and the treachery of those they thought allies.

This was a treat in every sense of the word. It plunges you into the period and does not release you until the very last page. For anyone who loves history, quality fiction and a fine read – this is the book for you.