Book Review: The Life of Elizabeth I by Alison Weir

Having read Weir’s non-fiction, The Princes in the Tower, and thoroughly enjoyed it, I knew that this biography of Queen Elizabeth I would be worth investing in as well. It was much more than that. Impeccably researched and beautifully written, Weir’s work on arguably one of the most significant English historical figures is a tour de force. Commencing before Elizabeth’s birth in order to provide a familial, cultural, social and religious context for the monarch she was to become, Weir quickly establishes the fraught times into which the second daughter of Henry VIII was born.

The period leading up to Elizabeth’s ascension to the throne is well known: the decapitation of her mother, Anne Boleyn, for apparent treason when she was only three; her half-brother Edward VI becoming king at nine, dying at 15 and, in order to ensure England remain Protestant removing his sisters’, Catholic Mary and Protestant Elizabeth from the succession in favour of his cousin Lady Jane Grey; Lady Jane’s ousting in favour of Mary after only nine days; England plunging into religious schism as Catholicism was restored and heretics burned, suspicion of heresy and treason falling upon young Elizabeth, who living with Henry’s last wife, Katherine Parr had to endure the unwelcome (?) sexual attentions of her step-mother’s new husband Thomas Seymour, as well as having to hide her Protestant leanings from her older sister- and that’s just some of the events! Witness to so much turmoil, when Elizabeth finally took the throne at 25, in 1558, it’s no wonder that she took a more moderate line on religion, refusing ‘to open windows on men’s souls’ or that she 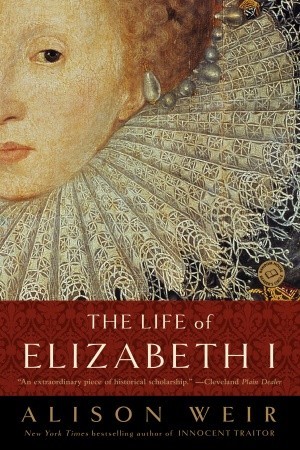 was reluctant to relinquish her unexpected but hard won autonomy and power to a husband.

After ‘Bloody Mary’s’ reign, Elizabeth was regarded by many as a saviour of the country, but her sex was always, even by those who respected her fierce intellect, ability with languages, and creativity (she was a gifted poet, musician and translator of the classics) struggled with her sex. Weir carefully explores the way Elizabeth kept both the Privy Council and the Commons dancing to her tune, enduring and appearing to consider their constant demand for her to find a husband and thus produce an heir while actually procrastinating continuously. Weir offers both psychological and practical reasons for Elizabeth’s ‘Virgin Queen’ status that are fascinating and plausible.

Virgin or not, ‘Gloriana’ enjoyed and encouraged the attentions of men and was a consummate flirt. Men were attracted to her power and, one imagines initially at least, her beauty. Robert Dudley, the Earl Of Leicester, his “stepson”, the Earl of Essex, Raleigh, Drake, foreign princes and dukes came into her orbit, but only a fortunate few were not destroyed by the encounter. Mercurial, demanding, vain, whip smart and with an enormous capacity to understand her people, proud, generous, haughty, Elizabeth was a handful. Prone to tears and tantrums, she also succumbed to flattery, particularly in her declining years.

Not all men fell for or pretended to yield for her charms (though none could deny her intelligence) and the queen, Weir makes clear, had a knack for surrounding herself with talented and loyal men such as William Cecil (Lord Burghley), his son, Robert, and Francis Walsingham. Women too, while not Elizabeth’s preferred company to keep, were among some of her closest and most beloved companions, such as Kat Ashby.

Earning the love of her people, the enmity of Catholic Europe, and the grudging admiration of her closest counselors, Elizabeth ruled England for decades, escaping assassination attempts, rebellions and Catholic uprisings, two papal bulls, never mind the Spanish Armada and countless attempts to marry her off. Weir not only gives us a fabulous portrait of the queen on the throne, but the woman beneath the white make-up, wigs and sumptuous gowns.

This is a marvellous biography that brings Elizabeth and the period to which she gave name to life. The problems – famine, greed, failed harvests, plague, disease, Catholicism – and the triumphs – the flourishing of the arts (theatre, writing, poetry, pamphlets, music, art) exploration, creativity, firmer establishment of the Protestant faith – with her unerring eye, gifted imagination and erudite mind. This is for lovers of history and those who enjoy a terrific read.