Historian Ian Mortimer does something really interesting with this book: he sets out to recreate the period (the Twelfth Century) as if he were writing a travel book for tourists as opposed to researching and explaining a forgotten time. In other words, he places the reader in the moment, advising you where to go, what to see, how to behave, speak, dress and what to expect should you happen to have the good fortune to be transported back to not-so-merry old England in the 1300s.

After my second reading of this book in less than a year, I wish I had access to Dr Who’s Tardis because, with Mortimer’s well-thumbed book under my arm, I would head straight for Exeter, where the book opens, prepared for the ordure of the aptly named, Shitbrook, the breath-taking sight of the cathedral, avert my eyes from the remains of criminals clinging to the gallows, and be careful not to stare at the bright and strange clothes the people are wearing, while tripping along the cobbles, one hand firmly on my money so a cut-purse does not take it. 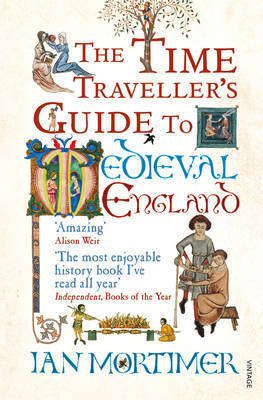 Like many contemporary historians, Mortimer believes in social history, reconstructing the past in order to understand how it was lived and not simply by kings, queens, monks, lawyers and nobles, those who have left records of their deeds and desires for us to absorb and through which we judge them. Instead, Mortimer turns to all classes and all experiences and takes the reader on a magnificent and fascinating journey back to a character-filled society with its own delights and dangers. It was so good the first time, I did it again and liked it even better.

Explaining where to stay, how to tell the time, greet people (Eg. “fellow or friend, ye be welcome”), about the sumptuary laws, what certain coins look like and what you might be able to buy and where, what diseases we might succumb to if we’re not careful, what we might be served and how to eat it whether it be in an inn, a peasant’s house or a king’s castle (all of which are thoroughly described as if you’re on a guided tour), Mortimer runs the gamut of class and place in this vivid recreation that is at once hugely informative and always vastly entertaining.

Even how to avoid running foul of the law and what punishment might be meted out is made clear as well as the significance of religious observances. Medieval humour is also explored as well as, for those so inclined, where you might find the best er hum, sexual services (Southwark, the Stews, in London, in case you wanted to know). He also discusses how to entertain ourselves while we’re there (the Stews aside) and who, among the great figures known to us now, we might expect to encounter on our journey – Geoffrey Chaucer anyone? He has rooms above Aldgate.

Just when you think you’ve stepped back into the present, Mortimer will remind you to take a deep breath and stop. Listen, he advises. What do we hear? Very little. Maybe some bells, the sounds of birds and animals and, above all, the chatter and clutter of people should we be near a town or city. Or, if present at a joust, the thunder of hooves. The medieval world is a very quiet place, something I hadn’t considered, along with many of the other preconceptions and yes, prejudices I had about this period and which Mortimer’s grandest of tours manages to overturn.

If you’re looking for a book that will literally transport you to another time and place, than I cannot recommend this one highly enough. A fabulous read.