What can I say? Oh. Wow. Talk about conjuring mixed emotions in the reader. I feel like either donning black and keening or dancing wildly through the room. I want to do the former because Flame of Sevenwaters is, I believe, the final book in this sublime series, and kick my heels up because it was so exquisitely beautiful. 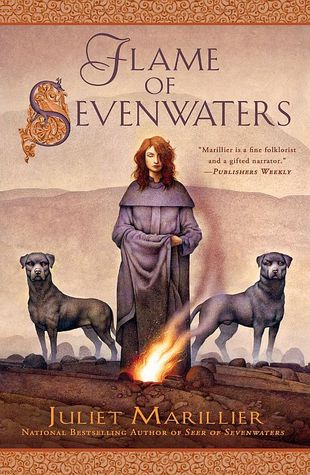 This novel tells the story of Maeve, one of Lord Sean’s daughters who, in an earlier novel, Child of the Prophecy, was badly disfigured as the consequence of a fire ten years ago. Sent to live with her aunt and uncle to recover, she learns to accept her physical limitations. Cruelly twisted and maimed, Maeve’s hands are all but useless, but she proves her worth to the household in other ways, mainly by working with animals. Maeve has an uncanny knack of being able to calm and reassure even the most fractious of beasts. What Maeve appears to be unaware of is that her talent can also work with the humans who come into her sphere.

When her uncle asks her to accompany a spirited, lovely and flighty horse, Swift, to Sevenwaters, Maeve reluctantly agrees, knowing her homecoming with be as much an emotional journey as it’s physical. In many ways, Swift’s nature functions as a mirror for Maeve’s and, in the horse’s doubts and transformation, Maeve’s is partially echoed.

Arriving back at Sevenwaters after such a long absence, she’s much changed. Forthright, loyal, brave and kind, Maeve’s mother particularly doesn’t know how to respond to the daughter she loves but whom she doesn’t understand. While her father appears to cope better, it’s really her young brother, Finbar, who seems to grasp Maeve’s needs and be able to read what she cannot articulate. Appearing at times stubborn and selfish and torn with self-doubt, Maeve’s struggles to be herself and live by her rules is also made clear.

Finding Sevenwaters on the brink of war, mostly brought about by the machinations of the lord of the Otherworld, Mac Dara, Maeve is at a loss to know how she can help. But other forces know how she can and they enlist her and her brother’s aid to resolve a dispute for power that’s long been brewing and for which Lord Sean’s family and his allies have been paying the price. But the cost of this power struggle between the fey is yet to be reckoned and not even Maeve may be prepared for the sacrifice that will be asked of her and those she loves.

I cannot begin to tell you how beautifully Marillier conjures this world and the people within it. Her prose is as lilting and haunting as the forest that encircles Sevenwaters. Her descriptions so evocative that you are transported into the stillness of the nemetons, the eerie Otherness of Mac Dara’s realm and the homeliness and memory-haunted halls of the castle.

Like all the novels in this series, there are tales within tales, stories that bind, reveal and conceal, and this novel is no exception. From the mouths of seers and seers in training come fables that function as thinly disguised lessons in life, relationships, love and choices as well as the future. Even the title of the book is a description, noun and verb. “Flame” is a role that can be fitted to more than a couple of the characters as they “flame” brightly at times. Indeed, the word ‘flame’ itself contains within it positive and negative attributes that evoke notions of destruction, cleansing, death, transformation and rebirth all at once. There is also the idea of power, steadiness, warmth and passion.

I really don’t want to give too much away, but there are two more points I’d like to make. In this novel particularly, Marillier does a simply lovely job of making her animals wonderful, steadfast and real characters. I adored the animals. Like the humans, I championed them, came to know and love them and wept copiously when they were in peril or worse.

This leads me to the other point. I cried almost non-stop throughout the final quarter of the book, pausing only to blow my nose, wipe my eyes (so I could continue reading) and absorb this magical novel. I admit, I was a compete sook, a wet-rag of emotion as I wept tears of sadness, joy, heartache and triumph. I went from sheer horror to exhilaration and was taken on such an emotional journey, all of which reminded me that, like Ciaran and the other seers who have featured throughout the series, I was in the hands of a master storyteller, someone who cares deeply about their tale and those who read it.

This was an experience I won’t fast forget and nor do I want to. But I do want to thank Juliet Marillier for creating such a beautiful world, populated by incredibly complex dark and light beings.

Parting is such sweet sorrow.