This is a brave book. Brave because it dares to tackle one of the most popular subjects available to historians and try and breath new life or at least create a different context for understanding the remarkable, mercurial and difficult Elizabeth I, “Gloriana.”

The key to the book lies in the title – the ways in which female friendship, enemies and rivalry influenced Elizabeth’s personality, upbringing, loves, and ultimately her reign.

Commencing, as many histories of Elizabeth do, with her mother, Anne Boleyn, and father, Henry VIII’s relationship, Borman tries to explain how Elizabeth would have understood the mistakes and triumphs of 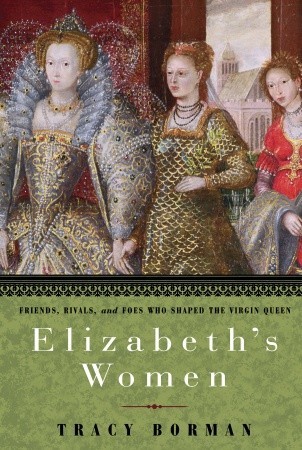 the significant women in her life, the manner in which they handled themselves, found a place in such a patriarchal society, and learned from that. Starting with Anne, who was executed when Elizabeth was so young, and examining how her mother would have been represented to and thus remembered by Elizabeth is apt. In her childhood and adolescence, Elizabeth’s fortunes were contingent on those of other women –  from her mother’s rise in her father’s court, to the overturning of the Catholic Church before she was even born, to her execution. Henry’s marriage to Jane Seymour and the birth of the royal prince and heir Edward, the quiet and dignified withdrawal of Anne of Cleaves after her father Henry VIII rejected her, Katherine Howard’s flightiness and deadly flirtatiousness, to the independence quiet Catherine Parr achieved as a widow would have all helped to shape the person young Elizabeth was to become.

Then there were her governesses and Ladies of the Bedchamber – many who stood by Elizabeth during the fraught times when her older half-sister, Mary, reigned (and Elizabeth stood accused of plotting against the throne and worse) and again, when her brother Edward became king. These women, such as Blanche Parry, Kat Ashley and many more besides took care of Elizabeth’s emotional and psychological needs as much as her physical ones, performing the role of mother, sister and family among others. Variously wise and silly, they steered Elizabeth through and sometimes into dangerous waters, but she never forgot their loyalty and trusted many of them implicitly, rewarding them and their families when she came to power. These were her “real” friends, one senses from Borman’s words, in ways that many other women were not. In fact, historian Alison Weir (who praises Borman’s scholarliness), in her biography of Elizabeth argues that the Queen saw most women as “threat”. Borman’s book would counter that claim as well as support it – Elizabeth either adored or loathed you – and not just women either.

Understanding the subservient role demanded by her sex, Elizabeth nonetheless tried to find ways to exert her authority once she came to the throne – sometimes that involved demeaning her own sex or highlighting her masculine qualities such as she did in her famous speeches – at Tilbury and, at the end of her reign, to parliament. As Borman writes, “Sixteenth-century society was shaped by the Church, which taught the misogynistic lessons of St Paul. Women were the authors of original sin; instruments of the devil. Their only hope for salvation was to accept the natural inferiority to men…” This was not to be disputed but taken as a fact that underpinned contemporary attitudes, including those towards Elizabeth for whom it was thought only a husband could provide the necessary qualities to govern England. Elizabeth’s elevation to the throne was regarded as simply the first stage in gaining England a male ruler  – this she would accomplish through an auspicious marriage which would later produce an heir.

The way Elizabeth staved off this compromising of her power is explored as well as some reasons for this proffered. Even the men who appreciated her intellect and cunning and were fiercely loyal to her such as William Cecil, Francis Walsingham and Robert Cecil, were also frustrated by her “weak” womanliness, her prevaricating, overt favouritism of certain men; what was regarded as the “problem” of her sex, and urged her to wed and resolve the accession issue.

It wasn’t only the men of Elizabeth’s council and court such as William Cecil (later, Lord Burghley), who believed that a male ruler was essential, there were even those who sought to use Elizabeth as leverage for their own climb to power and take her as a bride such as Thomas Seymour (a scandal that nearly destroyed a teen Elizabeth and has given source to countless fictive (and factual) speculations about what really went on between them) and, later, Robert Dudley (the same can be said for his relationship with her – something the infamous Leycester’s Commonwealth – published in 1584 –  fuelled with its dreadful claims). For the first twenty years of her reign, Elizabeth appeared to taunt her Privy Council by considering very respectable offers (and some not so desirable) of marriage from foreign rulers (and even the local boy, Earl of Arran) before discarding them and remaining a spinster – the Virgin Queen, a title that, twenty years after she took the throne no-one dared dispute but instead, began to embrace. When it came to husbands, the error in judgement of other women around her (in this case, her sister “Bloody Mary” and her unhappy marriage to the despised Spanish and Catholic Philip and the problems that wrought for England as well as Mary Stuart’s poor choices of men), would have been apparent to her. Borman also speculates a fear of childbirth, though that’s to be understood in this period when mortality rates for mothers and infants were high.

Taking the reader through all the major stages of Elizabeth’s reign, focussing on politics, relationships, scandals, triumphs, dress and pageantry but explaining the importance of the latter to the maintenance of both a royal persona and a façade of control, Borman explores many of the queen’s intimate and not so close relationships, including the complex love/hate, friend/rival, threat/promise of Mary, Queen of Scots, Bess Hardwick, the Greys, the Knollys, making it clear that though Elizabeth was whip-smart and a politician par excellence, she was also capable of great loyalty, jealousy, pettiness and cruelty when it came to women – events surrounding her upbringing could not have her any other way.

What was also interesting in terms of modern concerns was Elizabeth’s paranoia around ageing and her attempts to conceal what’s a fact of life from her courtiers and foreign dignitaries – with the exception of the women of her chamber. Wigs, heavy make-up and a rigorous exercise regime were upheld almost to the last, even when small-mindedness and in-fighting was rife throughout the court in the last couple of years of Elizabeth’s rule. Determined to demonstrate her capabilities, Elizabeth appeared to understand that for a female particularly, appearances counted as much as performance (plus ca change!). While a woman was not to be trusted and was seen as inconvenient and incapable, an old woman was worse. In the end, age was a great foe that not even Elizabeth could defeat.

An interesting book that is very easy to read and highly accessible – even for those who do not know too much about Elizabeth’s reign – though a basic if not sound knowledge does enrich the book and allows the reader to critique some of the claims – which is always a fascinating exercise. It’s terrific to be offered challenges to “facts” and think about what might have been and different ways about what was. Thoroughly enjoyed this as a welcome addition to the Elizabeth canon.