I was drawn to write my column this week on this topic because of something Australian Today show host, Karl Stefanovich said during the segment “Girls on the Grill”. Discussing the recent Tom Cruise/Katie Holmes split, he made the observation that he didn’t know a single bloke who was interested in this story. That comment served to get me thinking. I initially bristled, but then I started to wonder if it was true and then try and balance the positives and negatives of women’s (or men’s or both) intense interest in the lives of celebrities. There are many more reasons than I came up with  – and I did only have just over 700 words to get my point across! Yes, that’s a defense 🙂

The published piece is here if you’d like to read it, otherwise, the unedited version is below! Would love to hear your thoughts as well!

When discussing the recent split between Tom Cruise and Katie Holmes, Today host, Karl Stefanovic asked why didn’t he know any men who cared about this story.

The implication being that interest in celebrities, their lives, marriages, divorces, children, hopes and dreams was firmly women’s fodder.

Frankly, men don’t give a damn.

Is celebrity gossip something that one sex is exclusively, if not genetically, programmed to heed?

While I wanted to deny that women are the main consumers of all things celebrity and the minuscule trivia of their often-vacuous lives, it was hard.

Celebrity business caters to a largely female audience – you just have to look at the content of major women’s magazines for evidence.

Not that all women relish it.

Celebrity gossip has become not only an industry; sadly, it’s a significant proportion of what passes for real news these days.

There are dedicated news segments, entire shows, magazines, books and websites, never mind careers (spin-doctors, handlers, consultants, PR experts, photographers etc), built upon and reliant on the ever-grinding mill of celebrity gossip. Professor Graeme Turner from the University of Queensland describes it as “the celebrity-industrial-complex”.

As Todd Leopold from CNN.com 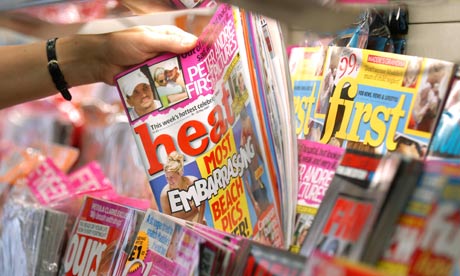 writes, “like any capitalistic enterprise, [it] only exists as long as interest continues.”

Superstar scandal, when reported, attracts the greatest amount of commentary, emotional investment and online bile – and not just from women.

Journalist and author, John Birmingham, in an article on the changing media landscape last month stated: “most readers are less interested in hard news than they are in complete tosh… A story about a celebrity wardrobe malfunction, especially if it comes with images, will totally bury an item of reportage about, say, hospital closures, or waterfront industrial action, or a review of defence policy or legislation for plain packaging on cigarettes.”

Is this women’s fault alone?

There’s a huge drive by vested groups to persuade us that celebrity stories are not only worthy of attention, but possess intrinsic value – even when a great deal is manufactured to protect and generate sales of a related product (an actor’s movie, book etc.).

While it’s easy to dismiss celebrity gossip and our apparent insatiable appetite for it, it’s useful to try and uncover why this plays such a significant role in our media-driven society and, apparently, women’s lives, and examine if it’s harmless or toxic.

Firstly, discussing celebrities not only functions as a moral yardstick by which behaviour can be monitored, thereby letting others know what’s acceptable and unacceptable among a group and within wider community circles, it’s a safe way to police social and personal boundaries.

If someone you’ve just met loves a celebrity, TV show, or film (or politician) you loathe, or vice-a-versa, you’re given a swift insight into whether further contact – digital or real life – should be avoided or pursued.

Secondly, celebrity gossip is also an anodyne social lubricant. Talking about a celebrity – whether it be they way they look, act, their relationship or parenting, creates a universal language and can serve as an ice-breaker in communal, professional and cyber-situations – hence the importance of  “water-cooler gossip.”

blematically, celebrity gossip tends to focus on domestic issues and appearances, long constructed and naturalised as the realm of “women’s business.”

Reinforced through a variety of cultural devices, such as women’s magazines, this gender exclusive space where celebrity tales reign, legitimates and prioritises concerns that were once dismissed as insignificant – those that centre on home-life.

Discussing celebrities also reminds women that their priorities lie in private space and in keeping their partners happy – whether it’s through appearance, sexual performance, food, how the children behave, or how they maintain hearth and home.

But it also provides stories of women (and men) who break the rules, are indifferent to various social stigmas and not only survive, but thrive. Some examples are successful adoptions, gay stars, single parents, and those who experience divorce, loss, grief, disease and myriad other issues.

In this way, it’s liberating and affirming.

The pervasiveness of this culture and its attendant gossip is such that it doesn’t matter whether you’re a man or woman. We can’t complain about or dismiss it so long as we maintain such a high level of interest and passive involvement.

Anderson Cooper, journalist, author and TV personality sums up most people’s feelings when he states: “The whole celebrity culture thing – I’m fascinated by, and repelled by, and yet I end up knowing about it.”