Sisters of the Fire by Kim Wilkins

The second book in the Blood and Gold series, Sister of the Fire is set a few years after the thrilling events of the first book, Daughters of the Storm, conclude. Once more, we’re drawn into the lives of the five very different sisters as they hurdle towards their unknown and dark destinies. Whether it’s the fierce and loyal Bluebell who’s on a mission to locate a sword that’s been crafted for the purpose of slaying her and which she fears one of her sister’s possesses; or forlorn Rose, the princess set aside by her Trimartyr husband, King Wengest, and who’s forced to live away from the man she loves and with her aunt and son – that is, until she learns the life of her daughter, the indefatigable Rowan, is in danger. We also follow the struggles of Ash as she comes to terms with the terrible power she wields, the fate she sees for the realm and will do anything to prevent. Then there are the twins, Ivy and Willow. Weak and ineffectual in comparison to her sisters, Ivy has been given in marriage to a man she doesn’t love and whose chronic illness threatens to unbalance the city she holds in care for her beloved sons. Then there’s the zealot, Willow. Having turned her back on the faith she was born into, Willow has become a warrior-priestess for Maava and, in her efforts to prove herself worthy of her cruel god’s love, will do anything – even betray the family and kingdom who remain steadfast to her.

Vast in scope and setting (the reader is taken from rocky shores, craggy islands, deserted towns, bustling cities to mystical forests and arcane castles), Sisters of the Storm is a tour de force of the imagination. Each of the main women in the story, and the men who either exploit or love them fearlessly, as well as the children the women love unconditionally (if not always well), are masterfully realised and sometimes brutally rendered. Wilkins doesn’t shy away from exposing their great strengths and tragic and even irritating weaknesses. You believe in these people, these flawed, majestic beings and the goals they pursue, and their need to forge or at least control their fates to the best of their ability. Just as they love with great ardour and conviction, so the reader does too, as we segue from one sister’s path before stumbling upon another’s, championing their individual or collective causes or mourning their dreadful decisions. The prose is evocative, moving and, at time, violent.

There’s no doubt, Wilkins, as story-teller par excellence, has a flair with words – a few well chosen ones conjure the depths of despair, the ache of maternal or passionate love, the fury of betrayal. Likewise, landscape is rendered minimally but with no less impact. You hear the ocean, smell the forest, and enter the bloody battles with your heart racing and your senses afire. The novel is imbued with wildness, mystery and beauty and these are carried through every page of this marvellous conclusion to a terrific series.

I also appreciated the fact that as you reach the final lines, not all doors are closed, not all paths end. I hope Wilkins returns one day to tell more tales about these divergent, complex sisters’ and their families, and the epic, but always recognisable world she’s created.

PS. I also have to say, I think the cover is simply stunning and reflects the contents beautifully…

Book Review: Daughters of the Storm by Kim Wilkins

This is an extraordinary novel that once I started reading it, found it hard to tear myself away from. Actually, I didn’t read this book – I devoured it – greedily. In Daughters of the Storm, Kim Wilkins, a masterful 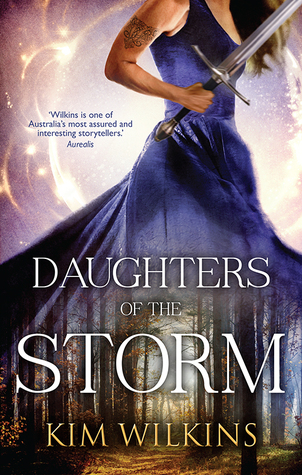 storyteller, presents us with a rich and detailed historical fantasy featuring a poisoned king, his five very different daughters, and a land in existential and leadership crisis.

Drawing on her vast knowledge and love of Anglo-Saxon England, Wilkins gives us a vivid and diverse world where faith, magic and individuals collide and geographical borders are only as strong as the leader enforcing them. When the King of Thyrsland lapses into a magic-induced sleep, suspicion turns not so much outwards as one would expect, but inwards towards his family. His eldest daughter, the formidable warrior, the wonderfully named Bluebell, determines to rescue her father from this grave enchantment – not only because she loves him dearly and blindly, but also for the sake of the kingdom she will one day inherit. Recognising the power that keeps him comatose is the wild “undermagic” and the only one who can help them is someone of their own blood, Bluebell employs her sisters’ help. Along with her mostly unwilling siblings, she embarks on a journey to find a cure and in doing so bring the kingdom back from the brink of war. Tall, scarred, strong, capable and tattooed, Bluebell inspires loyalty and loathing in equal measure, and not just from her men or the enemies she encounters but, as she’s to learn, from those closest to her as well.

What Bluebell doesn’t bargain on is her sisters and the terrible secrets they hide, secrets that have the potential to not only undo her intentions, but tear the family apart as well.

While this is at one level a quest novel, the journey the main characters undertake is not simply physical, but psychological and emotional. So it is with Bluebell and her sisters who are also forced to examine the past and their own choices, in relation to the present and, indeed, the future. Mostly estranged from each other, they’re presented to the reader as three-dimensional characters with their flaws, foibles and strengths on display. Whether it’s the unhappily married mother, Rose, the mystic Ash, or the twins, the sanctimonious Willow and hormone-charged Ivy (both of whom you often want to slap in the face), they feel real and whole and thus you can appreciate the choices they make, even when you wince or wonder why. Complicated, and passionate, the shifting viewpoint in the novel allows us to get to know each of them over the course of the story and you find yourself allying with one then another, or despairing at what you know the outcome will be… only, in typical Wilkins’ fashion, you don’t know. They are not always likeable either, and I love that Wilkins has taken such a risk as making her major characters unattractive at times – just like real life. You may not always like them, but you do understand them – this is clever writing that doesn’t condescend to readers.

This is also where Wilkins excels as a novelist, in her ability to present readers not only with a terrific tale, but with complex, fascinating characters with their own rationale for action, gently exposing the deep motivations that drive them, even if they take a little while to be revealed. But it’s not only the women who are represented this way either. Daughters of the Storm also has some wonderful and imperfect male characters as well – from the slumbering king, to the bitter Wylm, the brutish Raven King, Hakon, the lonely undermagician, and the love-lorn Heath.