Shop till we stop: Online versus bricks and mortar shopping

This is my column that appeared in the Courier Mail, Wednesday 10th August 2011.

According to media and other reports, consumers’ shopping preferences are slowly shifting from bricks and mortar to online retailers.

As Johnny Lee noted in last Wednesday’s Courier Mail, businesses are bemoaning the loss of custom and are quick to blame the Internet, government’s refusal to charge GST for online goods under $1000, and the consumer’s save-and-invest mindset.

A recent debate in Businessweek between chief executive of PowerReviews, Pehr Luedtke and David Bell, professor of marketing, University of Pennsylvania, explored the pros and cons of e-commerce versus traditional shopping.

For Luedtke, online shopping offers convenience and depth (more product choice) as well as the relevance of social networks, where opinions and reviews about the goods from other users can be sought.

Bell, on the other hand, sees conventional shopping as a process. He argues that when we shop, “we’re observing, learning, updating, chatting. For many shoppers, this is part of the reason to shop. This kind of shopping need not even end in purchase—just being in the real (physical) store is all part of the fun.” 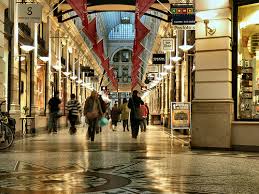 I don’t know about you, but it’s been a long time since I correlated shopping with “fun”.

Any joy or value in the process has been destroyed, not only by over-inflated prices, under-qualified and rude or indifferent salespeople, but also by the proliferation of franchises.

Go to a shopping mall in Chermside and you’ve been to them all. No matter what state or region, they’re identical, offering the same products, music, dreadful lighting and, too often, the same poor service.

Shopping centres were designed to be community hubs, where families and lone shoppers could socialise, be stimulated, entertained and sated at a variety of levels.

Stripping malls of any local identity has reduced the experience to an impersonal and frenetic one where the consumer is bombarded with brands, sales and often insolence.

Searching for a shopping experience that’s pleasurable and personal, let alone finding an independent retailer with quirky products that offer value for money is like taking part in an archaeological dig: the evidence they exist(ed) is there, but finding the proof is hard.

As a consequence, online shopping has boomed, surging 13 percent in 2010 to $13.6 billion.  Due to the rise in value of the Aussie dollar, approximately half the sales went to offshore vendors. The National Retail Association estimates that online shopping has cost around 2,000 jobs. At least ten major retailers have been forced into receivership as well.

If conventional retailers want to survive in this cutthroat environment, they have to change their tactics and respond to the customer who, in this instance, is always right: right to expect a fair price and courtesy.

Carl Hartmann, Managing Director of freight systems aggregator Temando says that these findings renew the imperative for Australian retailers to focus on service.

Lee would agree. He says that: “The retailer’s task is to shift the focus from price to value.”

A quick excursion to a nearby shopping centre and you’d believe this was an impossible task.

From dumping change on counters, to chatting to colleagues instead of customers, or being downright discourteous, some shop-assistants are serving to drive custom away rather than attract it.

Frankly, if I wanted to be abused or ignored, I’d become a politician.

Wanting to support local businesses, their high overheads, wages and rents become meaningless when customers are treated as intrusions or they’re met with disdain.

I understand that manners work both ways and some consumers are impossibly offensive, but that doesn’t make treating every customer with contempt viable.

If you do, they won’t return. With so much competition, even businesses in small or remote areas that once had a monopoly and could expect repeat custom, can’t guarantee this.

Friendliness and engaging with the patron, being able to discuss and respond to needs are still areas where traditional shops and their staff have the opportunity to trump online experiences.

Both can generate loyalty and attract repeat trade, but face-to-face opportunities only occur in the real world. So it’s more important than ever to make every single one count.

E-commerce won’t replace traditional shopping, but how much market share it will grab is still open for business.