Last night, the much-hyped Winners and Losers screened on Channel 7. The story of four chums, reunited at their surprise ten-year high school reunion, replaced the spot left vacant by the incomplete season of the hit family show, Packed to the Rafters. The idea behind taking Rafters off air and replacing it with a new show was to give Winners and Losers a chan 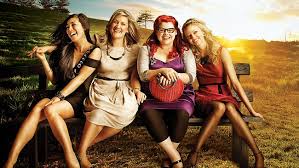 ce in a time-slot that not only carries a sizeable audience over from My Kitchen Rules, but already had a dedicated fan base. But, of course, reasoning like that only works if you replace an apple with an apple. That Winners and Losers is also created by the same team that gives us Rafters makes that sort of strategising and assumption a safer bet than usual.

But does that mean it will work?

I was looking forward to giving this show a chance, despite the fact the ads made it look superficial and simplistic in its treatment of women and thus men. Featuring Melanie Vallejo (who did a guest spot on Packed to the Rafters) who plays Sophie Wong, Virginia Gay (Rebecca) from All Saints, and newcomers, Zoe Tuckwell-Smith (Frances) and Melissa Bergland (Jenny), the female ensemble appeared strong and interesting, though I noted the politically correct blend of body sizes and shapes, ethnicity and hair colour. I guess the producers have to tick certain boxes.

The show commences by establishing a context for each of the four girls: Sophie is a former med student and now a personal trainer who seems very comfortable in her heterosexuality.  By my count, at the end of one hour of screening, she’d slept with at least four different men. Fine, if that’s your schtick, only what really annoyed me was that the only person she wasn’t sleeping with was her best mate, the lovely Doctor who, is not only her conscience (as she introduces him to her other friends), but pays her bills as well. Jiminy Cricket with cash. Unless the tragedy in her past is that this Doctor is gay, it makes no sense. In fact, it’s So Wong (Sophie’s cruel nickname at school), it’s stupid. Oh, and did I mention that she used to be obese? Well, she was but now she is gorgeous. Of course. The ugly duckling becomes swan – never heard or seen that before. Vallejo played her very well, which was a saving grace, and she did have some good lines.

Then, there’s the career chick, Rebecca. Thought to be lesbian by her school mates (because she’s tall and smart and good at netball?), Rebecca is someone who wins a Fulbright scholarship, runs her own business or is a partner or… whatever… and has a gay PA who adores her. Of course, this woman, like all the others, goes to pieces when confronted with the high school bitch (who I will get to in a minute) or has netball violence fantasies – I think Kath and Kim or Shazza will want copyright on some of that. WTF? This also made no sense.

Now we get to the final two – Frances and Jenny  – who are best mates. Frances is engaged to Blair Donaghue – remember him? Not only was he in Neighbours, but he’s the guy who was runner-up in Big Brother years ago and who, it has to be said, has crazy eyes. If he looked at me the way he looked at his fiancee, Frances, I’d not sleep and be anxious as well. Frances thinks that’s happening because of the pressure to attend or not attend the high school reunion. No, it’s because of her fiancee. Him or her best friend, the needy, overweight Jenny who has bright red (dyed) hair and who lifts her sense of style straight from the IT geek in Criminal Minds – Penelope whatsherface. In fact, I swear she was channelling her. When I realised that Jenny is also an IT geek, I groaned. My husband wanted to commit hari-kari.

You getting the picture? These four women, the leads in a new show that showcases contemporary womanhood, are drawn using a series of tired cliches and stereotypes. So much so, that when we get to the reunion, the girl running it, Tiffany, is sad and old – not the actor, just the lines she’s given and her manner. It’s been done, it’s been dusted and, for a moment, I thought we’d stumbled onto the set of an American cheerleader movie or Mean Girls. Who speaks like that?  Who dresses like that? OK, yes, I know some women do, but it was so demeaning and embarrassing in terms of the show itself. Aren’t there other ways of portraying friendship, the frenemy, and femaleness than competitive dressing, bitch-speak and poor acting? Queen bees and wannabees in their late 20s? it was just boring, bland and predictable. I also disliked the idea that, the the first show was predicated on the notion that we all revert back to simpering 16 year olds the minute we’re confronted with our high school pasts. When Jenny climbs on stage and gives  Tiffany the serve, we all saw it coming the moment her dad pulled up to the reunion or Sophie stumbled into the toilet, or Rebecca’s heel caught in the pavement. Again, it didn’t offer anything dramatic, funny or revelatory in terms of script, character or women. Winners? I think it made us all look like losers. End of story.

Similarly, when Jenny refused to be a part of  the lotto ticket purchase (puhleez? For two dollars she doesn’t join into this symbol of cementing the bond that had just been formed between the friends, especially after they’d all uttered how much it meant to them, and she felt alienated from her friend Frances?), we knew what the outcome would be the moment she d 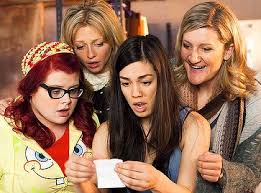 eclined. Of course they would win lotto – and an amount neatly divisible by 4. Of course. I already know how next week’s episode will play out and probably the one after that.

I suspect others will too. That’s why, despite winning its timeslot with a respectable 1.6 million this week, I’m not convinced these figures will continue, not unless the story improves and the characters develop into something more than two-dimensional female stereotypes with nothing new or interesting to offer.

I’m all for a bit of stereotyping, but not when it’s so boring, you roll your eyes or worse, wince in embarrassment. And another point, I’m not sure that this is the type of family viewing the Rafters was either. For young teenage girls, there’s not much hope or heart in seeing four lovely women, each with no doubt a great deal to offer, fret over a reunion, collapse at one look from the former school bully or parade their insecurities like Lady Gaga does her underwear.

I will give this show another chance, but at the moment, it’s not winning much but criticism and a great deal of disappointment from me.