For my column this week, I wrote on celebrity chefs and reflected on whether or not they ran the risk, through over-exposure, of going past their use-by date.

Interestingly, back in 2003, I wrote a quite risque piece on the rise of the celebrity chef (pre Masterchef Australia and My Kitchen Rules) – but little did I know back then what a phenomenon he/she would become.

It also appeared in the Courier Mail. It was called ‘Foodies Eye for the Gourmet Guy’ (I didn’t think up the title!) I thought I would post it here as I found it really fascinating to think how far they’ve come in the popular culture landscape as well as the influence they wield beyond the kitchen (in terms of social trends) in just eight years.

While a bunch of queer guys has been popularising the art of primping and making all things gay cool, a more subtle revolution has been taking place in kitchens all over the country and, if Oprah is to be believed, the Western world.
The kitchen, traditionally represented as the female space and heart of the home, where the little barefoot and pregnant woman slaved over a hot stove feeding and nurturing her hungry hordes, is being colonised by men.
Suddenly, this most exclusive of feminised spots has become all bloke-like and it’s pukka to come out of the pantry and confess to savouring the joys of food preparation.
What has caused this takeover bid?
Perhaps the answer lies in the preponderance of cooking shows and the creation of a new kind of celebrity: the chef.
Up to 30 programs a week are available for general consumption, demystifying the cooking process. Young and old alike are savouring celebrity chefs and their brand of RTV.
Whether its Jamie Oliver, Nigella Lawson, Rick Stein, Ian Hewitson, Ainsley Harriot, Neil Perry, Kylie Kwong or Dorinda Hatfield, th 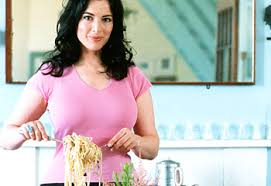 e days of Margaret Fulton and Bernard King are passe. There is nothing matronly or effeminate about these contemporary food stars. On the contrary, they turn the arduous chore of preparing meals into something of a fashion statement; an accomplishment to be relished.

The kitchen is fast becoming the most tantalising room in the house.
So what, after decades of nagging, has dragged the men in there?
You guessed it — it’s the sex.
This new breed of culinary experts makes that most mundane of domestic chores suddenly sexy — and the men want to be a part of that. And who can blame them?
If, as a current ad suggests, cookbooks are the new pornography, then surely, cooking shows up the ante, turning the written form into a visual feast. Nigella, the domestic goddess, transforms cooking into the most sensual of pleasures as she indulges in her “bejewelled fruitcakes” and “velvet chocolate”. At every opportunity she is shot, Linda Lovelace fashion, placing foodstuffs in her mouth only to draw them out in sinful strands.
Appealing to males and females, adorable Jamie, the naked chef, with his down-to-earth no-frills approach to cooking, is the John Holmes of the kitchen. Everyone knows he has a big pestle and all the men want one. Just ask Max Boyle and Sally Pickersgill of House at Kawana Shopping World.
Boyle and Pickersgill are “blown away by the impact Jamie has had on sales”. It’s not just Oliver who is kneading their dough. Men who 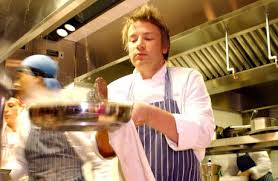 watch cooking programs are frequenting their store and buying all sorts of gadgets from Hewie’s microplane to Oliver’s industry-size granite mortar and pestle with the desire to spice up their lives. And the women are buying these products for their men as well. One of Boyle and Pickersgill’s suppliers sold out of a six-month stock in only five weeks.

BOYLE notes that this trend is directly related to what’s being shown on television and shakes her head at the “power of the media”. However, the pair note that it’s wonderful for business.
June Hunkin, of kitchen appliance store Place Mat in Buddina, says this change is directly due to the growing popularity of celebrity chefs, such as Jamie and Hewie. While once only professional chefs (usually men) and women entered the store to buy or sample a domestic appliance, men from all walks of life — doctors to bricklayers — are embracing the joys of nightly menus, grating, peeling, slicing, chopping, and bashing.
Yes, bashing.
Let’s not muck around here. Jamie and his ilk have spoilt the broth — they’ve turned the kitchen into the millennium man’s toolshed. Gargantuan knives, turbocharged beaters, 600,000 watt microwaves, and 12-burner stoves with boosted fans — you need a licence to drive half the equipment.
With all that help, their fare might be tasty, but what I want to know, is who cleans up the mess?
For years, canny men have known the sensual appeal of preparing a meal. Wink, wink, nudge, nudge, gourmandising leads to more than fantasising. Like an elaborate foreplay, a beautifully prepared meal is an event that affords all sorts of pleasures for a couple.
But cooking shows are turning us into more than simply epicures. They also are educating men and women about relationships, division of labour and how, with a shift in attitude, even the most ordinary of tasks can be transformed into an act of friendship, love and care.
So, have the men really taken over or do they just want to share the cooking? Maybe both, perhaps neither. But there’s little doubt that ever since Jamie and Nigella entered the room, the kitchen has become rather an exotic and fun place to be and I take my apron off to them.
And remember if you do enjoy preparing the menu: it doesn’t matter where you get your appetite, as long as you eat at home.

Love to hear your thoughts on the celebrity chef. Whose your favourite? What do you think of the shows? And do you think they’re ‘selling out’ by involving themselves in so much endorsing (eg. the big supermarket chains)?