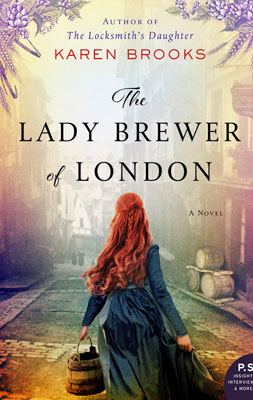 An unforgettable historical tale set in fifteenth-century England of a brilliant woman’s defiance, courage, and ingenuity—from the author of The Locksmith’s Daughter and The Chocolate Maker’s Wife.

1405: The daughter of a wealthy merchant, Anneke Sheldrake suddenly finds her family bankrupted when her father’s ship is swept away at sea. Forced to find a way to provide for herself and her siblings, Anneke rejects an offer of marriage from a despised cousin and instead turns to her late mother’s family business: brewing ale.

Armed with her mother’s recipes, she then makes a bold deal with her father’s aristocratic employer, putting her home and family at risk. Thanks to her fierce determination, Anneke’s brew wins a following and begins to turn a profit. But her rise threatens some in her community and those closest to her are left to pay the price.

As Anneke slowly pieces her life together again, she finds an unlikely ally in a London brothel owner. Determined not only to reclaim her livelihood and her family, Anneke vows not to let anyone stand in the way of her forging her own destiny. 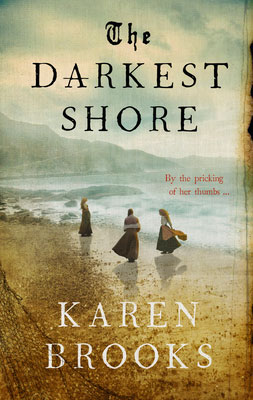 The independent women of Scotland stand up to a witch hunt, male fury and the power of the Church in a battle for survival in this compelling historical novel based on true events in early eighteenth century Scotland.

1703: The wild east coast of Scotland.Returning to her home town of Pittenweem, fishwife and widow Sorcha McIntyre knows she faces both censure and mistrust. After all, this is a country where myth and legend are woven into the fabric of the everyday, a time when those who defy custom like Sorcha has are called to account.

It is dangerous to be a clever woman who ‘doesn’t know her place’ in Pittenweem – a town rife with superstition. So, when a young local falls victim to witchcraft, the Reverend Cowper and the townsfolk know who to blame. What follows for Sorcha and her friends is a terrifying battle, not only for their souls, but for their lives, as they are pitted against the villagers’ fear, a malevolent man and the might of the church.

Based on the shocking true story of the witch hunt of Pittenweem, this multi-layered novel is a beautifully written historical tale of the strength of women united against a common foe, by one of Australia’s finest writers. 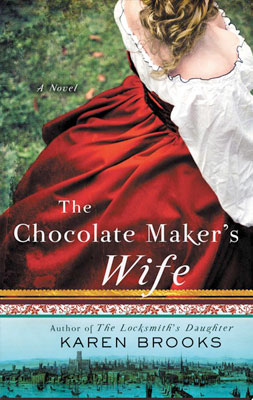 Australian bestselling novelist Karen Brooks rewrites women back into history with this breathtaking novel set in 17th century London—a lush, fascinating story of the beautiful woman who is drawn into a world of riches, power, intrigue…and chocolate.

Damnation has never been so sweet…

Rosamund Tomkins, the illegitimate daughter of a nobleman, spends most of her young life in drudgery at a country inn. To her, the Restoration under Charles II, is but a distant threat as she works under the watchful eye of her brutal, abusive stepfather . . . until the day she is nearly run over by the coach of Sir Everard Blithman.

Sir Everard, a canny merchant, offers Rosamund an “opportunity like no other,” allowing her to escape into a very different life, becoming the linchpin that will drive the success of his fledgling business: a luxurious London chocolate house where wealthy and well-connected men come to see and be seen, to gossip and plot, while indulging in the sweet and heady drink.

Rosamund adapts and thrives in her new surroundings, quickly becoming the most talked-about woman in society, desired and respected in equal measure. 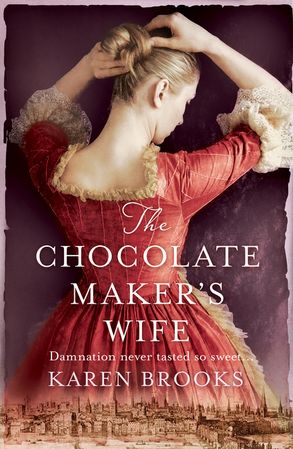 Australian author Karen Brooks rewrites women back into history with this sweeping, breathtakingly researched tale of 17th century London. Set against the backdrop of Restoration London, the plague and the Great Fire, this is a tale of cruelty, revenge, redemption, love and hope, and the sweet, sinister temptation of chocolate.

Damnation has never been so sweet…

When Rosamund Tomkins enters the world she is so different, with her darkling eyes and strange laughter, that the midwives are afraid, believing her a changeling. But Rosamund’s life is set to be anything but enchanted…

Born into poverty, brutalised and ignored by her family, it is only when she is married off to a nobleman that her life undergoes a wondrous transformation, as he recognises that Rosamund infuses magic she does not know she possesses into everything she touches.

In a world where no one can be trusted and secrets are currency, one woman stands without fear.

Mallory Bright is the only daughter of London’s master locksmith. For her there is no lock too elaborate, no secret too well kept. Sir Francis Walsingham, spymaster and protector of Queen Elizabeth – the last of the Tudor monarchs – and her realm, is quick to realise Mallory’s talent and draws her into his world of intrigue, danger and deception. With her by his side, no scheme in England or abroad is safe from discovery; no plot secure.

But Mallory’s loyalty wavers when she witnesses the execution of three Jesuit priests, a punishment that doesn’t fit their crime. When Mallory discovers the identity of a Catholic spy and a conspiracy that threatens the kingdom, she has to make a choice – between her country and her heart.

Mallory, however, carries her own dark secrets and is about to learn those being kept from her – secrets that could destroy those she loves. 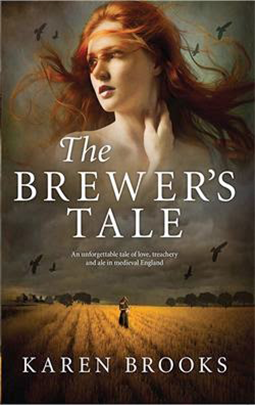 It had been Mother’s secret and mine, one passed down through the de Winter women for generations. I would ensure it was kept that way, until I was ready to pass it on.

When Anneke Sheldrake is forced to find a way to support her family after her father is lost at sea, she turns to the business by which her mother’s family once prospered: brewing ale.

Armed with her Dutch mother’s recipes and a belief that anything would be better than the life her vindictive cousin has offered her, she makes a deal with her father’s aristocratic employer: Anneke has six months to succeed or not only will she lose the house but her family as well.

Through her enterprise and determination, she inadvertently earns herself a deadly enemy. Threatened and held in contempt by those she once called friends, Anneke nonetheless thrives. But on the tail of success, tragedy follows and those closest to her pay the greatest price for her daring.

Ashamed, grieving, and bearing a terrible secret, Anneke flees to London, determined to forge her own destiny. Will she be able to escape her past, and those whose only desire is to see her fail?

A compelling insight into the brewer’s craft, the strength of women, and the myriad forms love can take. 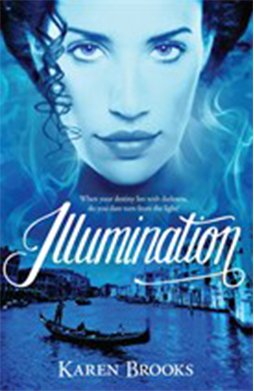 Talented candlemaker. Intoxicating courtesan. Lethal assassin. Can Tallow become what she has always denied   . . . or is it too late?

Against a backdrop of bloodshed and turmoil, Tallow flees the cunning Maleovellis and a city on the brink of war to enter the Limen, determined to find the Estrattore and meet her destiny.Unbeknownst to Tallow, she sets in motion forces beyond her control. From Serenissima to Farrowfare, enemies – as well as those she has always trusted – plot to ensure her compliance and, ultimately, destruction.

But in doing so, they make a fatal mistake – they underestimate her and the power she can wield. 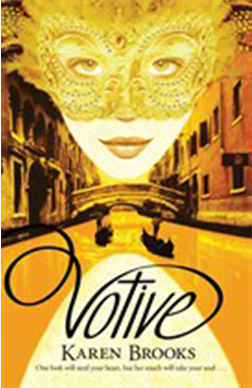 La Serenissima – a beautiful but deadly city where corrupt aristocrats rule and everything, including love, has a price.

Tallow is anything but a simple candlemaker and when she has everything taken away from her – friends, family, hope – all she can do to survive is rely on the Maleovellis. Casting aside the safety of her disguise, she becomes cold-hearted Tarlo, female courtesan and the toast of those who, if they knew her secret, would destroy her. But the intrigues of the Serenissian nobility are nothing against the larger forces moving within the world. And Tallow’s enemies have a hidden asset: the one thing they know she cannot possibly resist. 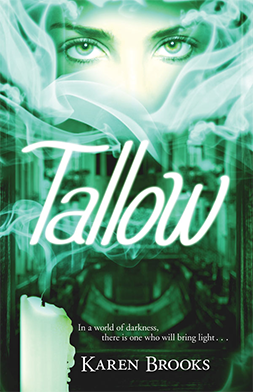 In a world of darkness, there is one who will bring light….

On the edge of a mystical border called the Limen, close to a beautiful canal-laced city, a humble candlemaker rescues a child whom he raises as his apprentice. Years pass and the child’s unusual talents are revealed, the gentle art of candlemaking slowly transforming into something far more sinister.Lingering in the shadows, enemies watch and wait – a vengeful aristocrat, an exotic queen and the lethal creatures known only as the Morte Whisperers. They hunger after the child’s ancient magic and will do anything to control it – betray, lie, manipulate. Even murder. A story of intrigue, deadly magic and a love so deep it transcends life itself. 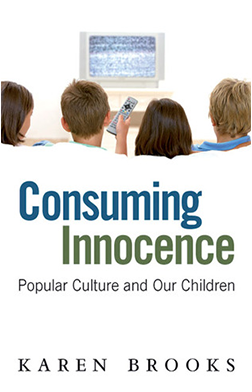 What has more influence over our children: Paris Hilton, The Simpsons, Facebook, mobile phones, trendy brands, sexy media messages … or you?

Consuming Innocence explores the complex relationship that kids – from tots and tweens to teens – have with popular culture. It considers the role popular culture and, most importantly, parents play in creating children’s ideas of themselves, and fearlessly questions the involvement of the corporations that target kids and promote sexuality.