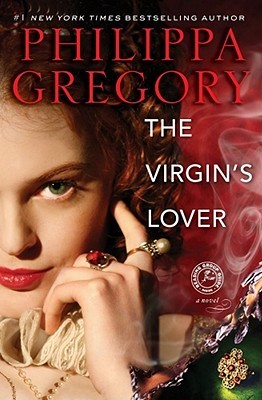 e to say, Philippa Gregory is such a reliable author. You always know that when you pick up one of her books, not only are you in for a good read, but one imbued with historical facts without overly didactic. So it is with the wonderfully titled, the oxymoronic, The Virgin’s Lover, essentially the tale of the relationship between Robert Dudley, the future Earl of Leicester, and Queen Elizabeth the First, the woman who would later be dubbed the “Virgin Queen.”

Set in the early years of Elizabeth’s reign, when she was not only being pressured by her council and foreign powers to marry and thus secure an heir to the British throne, but was also the victim of plots to overthrow her and restore the Catholic faith (and a Catholic royal), it shows Elizabeth at her mercurial, cocky and overbearing best – at least on the surface. Confident in her youth, beauty and brains, she wields authority as though born to it, when in reality she was never intended to lead the country, let alone be a sole sovereign.

Gregory does not hesitate to expose Elizabeth’s awareness of this and thus her insecurities, and anyone raised on a diet of BBC miniseries of the Queen’s life or Cate Blanchett and other actors’ powerful portrayals (Helen Mirren’s is one of my favourites), might find reading of her indecision and constant need to reassure herself with her confidant Dudley, irksome and feel it rings false. Yet history indicates that the queen was notorious for changing her mind, seeking the advice of familiars and ignoring the counsel of those who might know best. Beset with nerves, prey to occasional bouts of hysteria, she presented a strong façade to the public. Unpredictable at best, difficult and demanding at worst, in Gregory’s interpretation, it seems no-one but Dudley could control or soothe her. Though, and this is something that drove me mad, Gregory has either read somewhere or decided to introduce in Elizabeth the habit of pushing her cuticles down as an indicator of a nervous disposition. There are far too many references to this – so much so, they detract from the story and jar whenever mentioned.

Gregory has also seen fit to take the rumours of a sexual liaison between the queen and Dudley to a logical conclusion and certainly, Dudley’s sexual power over Elizabeth does account for the authority he was able to throw about in her name and elsewhere.

Confident he would one day come to the throne, there was only one obstacle in Dudley’s way: his wife, Amy Robsart. An early marriage of convenience on his part and love on hers, the needy, clinging Amy who is abandoned for the queen, in Gregory’s book is finally given a voice.

Sometime plaintive, other times painful, it’s nonetheless fascinating to “hear” the thoughts and desires of Dudley’s wife, the “other woman” to Elizabeth, and be given an insight into her despair and the knowledge that she has lost not just her husband, but her love.  Forced to seek shelter from friends, a situation that became increasingly fraught as Dudley’s favour and chances at kingship grew, Amy cuts a pathetic and tragic figure. But, if you know the history you also know that there’s a sad and twisted sense in which she finally gets her revenge upon Dudley for his betryayal and Elizabeth for seeking love where it was already taken.

Gregory takes delicious liberties but without sacrificing veracity. A good read that certainly puts a strain on the idea of Elizabeth as a “Virgin Queen.”