I don’t know why I have waited so long to read this book but, having finished it in one sitting, I know I haven’t only read an amazing novel, but had an emotional experience like no other. 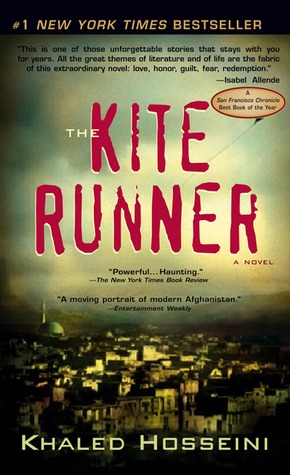 The Kite Runner tells the story of two young Afghani men who live in Kabul in quite different circumstances. One, Amir, through whose eyes the story is told, is wealthy, educated and privileged, his father being a strong, athletic and ethical man who wields power and earns respect. The other, Hassan, is the son of one of Amir’s father’s beloved servants and comes from a different ethnic group, the Hazara. Despite the differences in their social status, the boys were not only fed from the same wet-nurse’s breast (their mothers dying when they were newborns), but grow up together, sharing significant moments, triumphs and failures while also being eternally divided by their social status and ethnicity. The first half of the book fo

cuses on their childhood and adolescence and the chapters are simply exquisite in their observations, the raw honesty with which personal flaws are described and acknowledged, and the simplicity as well as complexity of Hassan and Amir’s relationship. This complexity becomes more evident as they grow older and, on Amir’s side at least, jealousy erupts.

Reading this section is like inhaling a flower’s perfume and becoming giddy with the fragrance… Yet, you know it can’t last. Already, as you revel in the joy of kite flying and running, for example, you know the seeds of destruction, of innocence lost, have been sewn. So you relish every moment in ways Amir especially does not and cannot. After all, what child can understand the consequences of their actions – even when they know they are wrong?

This is something the book explores in detail – how what we do in a rash moment, even when we know it is morally, ethically wrong, disloyal, foolish or a betrayal, can set in motion consequences that reverberate for decades. Against a backdrop of invasion and pending war, and as more characters enter their universe, the magical, insular world the boys inhabitbegins to dissolve. But no one could foresee what was to happen…

The second half of the book shows how the actions – both on the page and off stage – impact upon the present. Heart-wrenching, moving, lyrical and lovely, providing insights into the hearts and minds of a different culture and faith, this sweeping story of generations, masculinity, femininity, war, liberation, immigration, refugees, is epic in scope and elegiac in execution. The prose is sublime. Phrases and descriptions linger in the mind, trip off your tongue as you have to say them aloud. Who thinks to describe a sky as a ‘blameless blue’? Yet, I saw it, felt it, stood beneath it – or rain as ‘melting silver’ (that makes me sigh), such is the power of Hosseini’s prose.

At no point is the plot predictable and sometimes the twists and turns are shocking, a punch to the stomach, a catching of breath so sharp it hurts, yet you keep reading, you cannot stop. Exquisitely told, The Kite Runner is a magnificent novel by such a gifted story-teller whose insights and humanity leap off the pages and whose imagination, like the kites Amir and Hassan fly, soars.