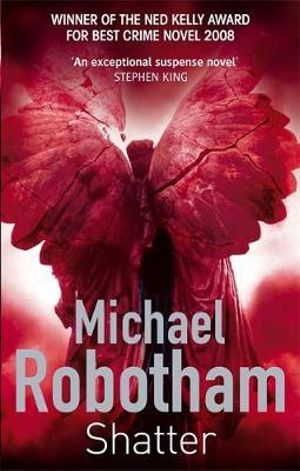 Once again, Michael Robotham has defined what’s meant by the often loosely applied term “page-turner.” I literally could not put this book down – I was turning the pages and burning the midnight oil because I simply had to know what happened next.

Written in stark, but laden prose that beautifully captures a range of human emotions, conditions and relationships, Shatter is another in the Joseph O’Loughlin series and a triumph of the genre.

Commencing with Professor Joe being unwillingly taken from university by police to where a naked woman with the word “slut” scrawled across her torso, talking on a mobile phone, is about to jump off a bridge, our poignant, Parkinson-suffering psychologist is unable to save her. Finding the situation plays upon him, when the woman’s daughter discovers where Joe lives and implores his help, insisting her mother didn’t take her own life, Joe believes her but, just because he’s convinced this is a murder case doesn’t mean any of those with the power to investigate it do as well.

Finding himself in the unenviable situation of being drawn into the life of a young woman he wants to help and the personal conflict it creates, Joe is caught up in a terrifying and sadistic revenge that, as the body count and danger grows, threatens to tear apart not just the lives of those connected to the killer, but his own family’s as well.

Segueing between the killer’s point of view and that of Joe’s, this is a chilling narrative that also manages to portray the brutal realities of those who witness and deal with dysfunction and violence every day and the inevitable toll this takes on the self and family. The dialogue is masterful, the scenes laden with suspense and, just when you think you cannot take it anymore, humour is thrown in as well, usually in the form of his friend, ex-cop, Ruiz. The way Robotham constructs his young characters is both realistic and heart-warming.

For those who love crime and well-written thrillers, with logical, exciting plots, terrifically crafted characters and dialogue with veracity, you cannot go past Robotham.

I am already two-thirds of the way through another of his books and am utterly in awe of this man’s talent.