Hang on to the edge of your page, because this is one helluva ride. 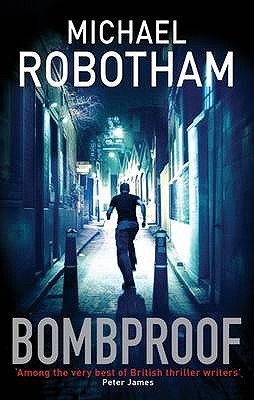 ome with a health-warning: inclined to induce insomnia. I read Bombproof in one sitting, staying up to watch the sun sneak through the blinds and hear the birds begin to bloody well sing. Serves me right for starting it so late at night.  A shorter novel than some of Robotham’s others, it’s also an incredibly fast-paced book that follows the extraordinary mis-adventures of the gorgeously named Sami Macbeth, the “unluckiest person” in the world. Not a criminal, not a terrorist and certainly not a murderer, poor Sami is mistaken for all three and faces the hefty and deadly consequences of such labels.

Falling into one scrape after another, Sami finds himself embroiled in a plot to sabotage evidence in a major case. When his involvement goes horribly wrong, resulting in the blowing up of a passenger train in the London underground and the grisly death of his accomplice, Sami find himself being hunted by the entire metropolitan police, the criminal elements in the city and his face plastered all over the media.

With nowhere to run, nowhere to hide, Sami turns to the one person who can help: *sound the trumpets*. Enter, stage right, Vincent Ruiz. Grizzled, retired and with better things to do than hunt a terrorist loser, there’s nonetheless something about Sami that appeals to Vincent. Maybe it’s his underdog status, maybe it’s the fact all the poor bastard wants to do is find his sister, or maybe it’s because despite the best minds in the business being focused on capturing Sami, they appear to have missed the most important clues of all…

A great read that really pulls no punches when exposing the role of the media in constructing heroes and villains,  Bombproof is for those who  love a terrific crime tale, a swift and spine-chilling thriller and /or are fans of Robotham’s work or , like me, all three. No doubt,  Bombproof is an explosive read(Sorry, terrible, but I couldn’t resist).